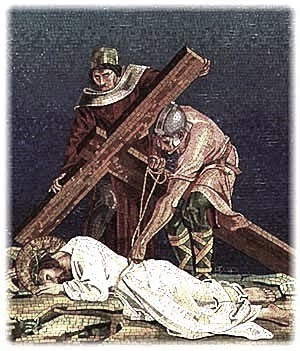 For good reason, of course, I often emphasize the great endurance and fortitude of the Catholic Martyrs of England and Wales after the Reformation and during the Recusancy era. But today's martyr, Blessed John Hambley, gave in thrice, renouncing his Catholic faith--one time at great cost to the Catholic laity who had protected him:

English martyr (suffered 1587), born and educated in Cornwall, and converted by reading one of Father Persons' books in 1582. After his course at Reims (1583-1585), he returned and worked for a year in the Western Counties. Betrayed and captured about Easter, 1586, he was tried and condemned at Taunton. He saved his life for the moment by denying his faith, then managed to break prison, and fled to Salisbury. Next August, however, the Protestant bishop there, in his hatred of the ancient Faith, resolved to search the houses of Catholics on the eve of the Assumption, suspecting that he might thus catch a priest, and in fact Hambley was recaptured. Being now in a worse plight that ever, his fears increased; he again offered conformity, and this time he gave up the names of most of his Catholic friends. Next Easter he was tried again, and again made offers of conformity. Yet after this third fall he managed to recover himself, and suffered near Salisbury "standing to it manfully, and inveighing much against his former fault". How he got the grace of final perseverance was a matter of much speculation. One contemporary, Father Warford, believed it was due to his guardian angel, but another, Father Gerard, with great probability, tells us that his strength came from a fellow-prisoner, Thomas Pilchard, afterwards himself a martyr.

~Since he "fell three times" I cannot help but think of the three falls of Jesus that occur in the traditional Stations of the Cross, especially since Blessed John Hambley's third fall came after Easter (thus the illustration above)!
~In 1582, he might have read Father Parsons' "A Brief Discourse Containing Certain Reasons Why Catholics Refuse to Go to [the Established] Church" or "The First Book of the Christian Exercise, Appertaining to Resolution".
~The Bishop of Salisbury in 1587 was John Piers. According to that wikipedia article, Piers had work to do in Salisbury: "At Salisbury, by command of the Queen, he brought the ritual and statutes of his cathedral into conformity with the spirit of the Reformation, with changes away from Catholic practice." He was appointed in 1571, more than ten years after the Acts of Supremacy and Uniformity, and Catholic practices remained in Salisbury!
~Remember that we just read about Blessed Thomas Pilchard and his incredible sufferings as a martyr, on March 21.