Ernest Dowson and "The Carthusians" 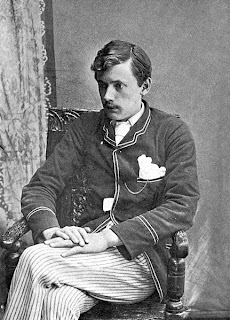 Researching more information about the first martyrs of the English Reformation, the three Carthusians, one Bridgittine and one parish priest executed on May 4, 1535, I found a poem by Ernest Dowson. If Ernest Dowson is remembered at all it might be because he contributed two great book and movie titles: Gone with the Wind* and Days of Wine and Roses**! (I can hear Max Steiner's "Tara's Theme" and Henry Mancini's song now.) According to the Encyclopedia Britannica Dowson was:

In 1886 Dowson entered Queen’s College, Oxford, but left in 1888 to spend six years working at his father’s dry dock in the Limehouse district of London. Dowson became an active member of the Rhymers’ Club, a group of writers that included William Butler Yeats and Arthur Symons. In 1891 he met the woman who would inspire some of his best poetry, Adelaide Foltinowicz, whose parents kept a modest restaurant in Soho, London. In that same year he published his best-known poem, “Non Sum Qualis Eram Bonae sub Regno Cynarae,” popularly known from its refrain as “I have been faithful to thee, Cynara, in my fashion.”*** Adelaide, who was 12 years old when they met, declined his offer of marriage, but he pursued her for the next six years, drowning the pain of his unrequited love with wine and women and demanding as time went on “madder music and stronger wine.”

He was received into the Roman Catholic Church about 1892. In 1894 his father died, his mother committed suicide, the family business failed, and Dowson discovered the symptoms of his tuberculosis. In 1897 Adelaide married one of her father’s waiters; after that, Dowson lived mostly in France, supporting himself by contributions to The Savoy and translations of Émile Zola, Honoré de Balzac, Voltaire, and other French authors. He was discovered in Paris wretched, penniless, and ill by a friend, R.H. Sherard, who took him back to London, where he died in Sherard’s house.

Dowson published two novels in collaboration with Arthur Moore, A Comedy of Masks (1893) and Adrian Rome (1899), and a book of short stories, Dilemmas (1895), but his reputation rests on his poetry: Verses (1896), the verse play The Pierrot of the Minute (1897), and Decorations in Verse and Prose (1899). His lyrics, much influenced by French poet Paul Verlaine and marked by meticulous attention to melody and cadence, turn the conventional world-weariness of the 1890s into a deeper sense of the sadness of things. Yeats acknowledged that much of his own technical development was due to Dowson.

He wrote this poem about Carthusian monks, and it certainly reminds me of the Carthusians of the Charterhouse of London, as Prior John Houghton and his monks tried "To dwell alone with Christ, to meditate and pray" and were instead pulled from their cloister to face trial, execution, and starvation:

Through what long heaviness, assayed in what strange fire,
Have these white monks been brought into the way of peace,
Despising the world’s wisdom and the world’s desire,
Which from the body of this death bring no release?

Within their austere walls no voices penetrate;
A sacred silence only, as of death, obtains;
Nothing finds entry here of loud or passionate;
This quiet is the exceeding profit of their pain:

It was not theirs with Dominic to preach God’s holy wrath,
They were too stern to bear sweet Francis’ gentle sway;
Theirs was a higher calling and a steeper path,
To dwell alone with Christ, to meditate and pray.

A cloistered company, they are companionless,
None knoweth here the secret of his brother’s heart:
They are but come together for more loneliness,
Whose bond is solitude and silence all their part.

O beatific life! Who is there shall gainsay,
Your great refusal’s victory, your little loss,
Deserting vanity for the more perfect way,
The sweeter service of the most dolorous Cross.

Ye shall prevail at last! Surely ye shall prevail!
Your silence and austerity shall win at last:
Desire and mirth, the world’s ephemeral lights shall fail,
The sweet star of your queen is never overcast.

We fling up flowers and laugh, we laugh across the wine;
With wine we dull our souls and careful strains of art;
Our cups are polished skulls round which the roses twine:
None dares to look at Death who leers and lurks apart.

Move on, white company, whom that has not sufficed!
Our viols cease, our wine is death, our roses fail:
Pray for our heedlessness, O dwellers with the Christ!
Though the world fall apart, surely ye shall prevail.

I have forgot much, Cynara! gone with the wind,
Flung roses, roses riotously with the throng,
Dancing, to put thy pale, lost lilies out of mind;
But I was desolate and sick of an old passion,
Yea, all the time, because the dance was long:
I have been faithful to thee, Cynara! in my fashion.

They are not long, the days of wine and roses:
Out of a misty dream
Our path emerges for a while, then closes
Within a dream.

***Which Cole Porter must have known: viz. Lois's "Always True to You in My Fashion" from Kiss Me, Kate!
Posted by Stephanie A. Mann at 2:15 AM