Church of the English Martyrs, York 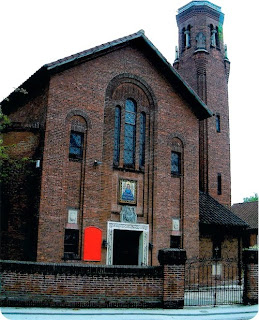 Since we are remembering St. Margaret Clitherow today, and have featured some other Catholic Martyrs of York recently, it only seems right to highlight the parish church in York dedicated to the English Martyrs.
The Parish of the English Martyrs is part of the Middlesbrough Diocese and yesterday, March 24, was the last stop on a pilgrimage in honor of St. Margaret Clitherow:
[The pilgrimage] will commence at 1.30pm with a Solemn Mass in the Church of St Wilfrid, which is close to York Minster. Following Mass, the procession will set off from outside St Wilfrid's at around 3pm, and will pass through The Shambles and over Ouse Bridge to the Church of the English Martyrs where, at about 4pm, there will be veneration of the relic of St Margaret followed by Benediction. Bishop Terence Drainey will be presiding at the Mass, which will be celebrated by Fr Michael Brown. The Rudgate Singers will provide the musical setting, which will be a modern one: Missa Summi et Aeterni Sacerdotis by Jeffrey Ostrowski. This may be unfamiliar to many people, but I don't think anyone will be disappointed. There will also be music by Victoria, Bruckner, Scarlatti, De Wael (another modern composer) and Gombert. During the veneration of the relic, the congregation will be invited to sing Faith of Our Fathers, Firmly I Believe and Truely (sic), and God of Mercy and Compassion. For Benediction the Rudgate Singers will sing the Perosi version of the O Salutaris, Bruckner's Tantum Ergo and Allegri's Adoremus. The Recessional will be the Worcester version of Laudes Regiae.
Here is a flickr series of pictures of the church, with this excellent detail about its history: "The mission began in 1881, with worship in a room in St. Mary's Court, off Blossom Street. In 1889 the congregation moved to 17 Blossom Street, where it occupied theupper story of a school building. This served until the present church and presbytery were built in Dalton Terrace (church opened on 4 May 1932). The architects were Williams & Jopling of Hull, who at the same time built St Vincent de Paul, Hull, to a very similar design, but smaller. The church and presbytery were built at a cost of about £12,000; the church seated 520 people.There are two parish halls; the small hall was built first, and the large hall later (inthe 1950s).The sanctuary was reordered by Weightman and Bullen in 1967, when the high altar, altar rails and pulpit were removed. A new forward altar was introduced, with parquet flooring to the chancel and seating around the apse, and a new terrazzo floor in the nave alleys."
Posted by Stephanie A. Mann at 2:18 AM