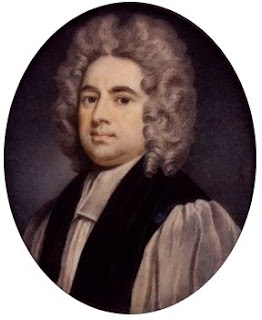 Francis Atterbury, future Bishop of Rochester, was born on March 6, 1663, during the reign of Charles II. He was born in Buckinghamshire and attended Christ Church at the University of Oxford, and was ordained in 1687. He became a leader of the High Church Anglicans. In the 18th century, he would play an important role in the plotting to restore the heir of Charles' brother James II, deposed in 1688, to the throne of England.

I dedicate a section in Chapter Nine of Supremacy and Survival: How Catholics Endured the English Reformation, to the Jacobite cause, without going into all the detail of how much plotting went on in England to restore the Old Pretender, aka James III (James Francis Edward Stuart) to the throne. I focus on the exile of the Stuarts and the effects of the Glorious Revolution on Catholics in the section "The Jacobite Cause and Catholic Nadir"--but Francis Atterbury was in the thick of things in England.
The Hanoverian dynasty established by the succession of George I under Parliament's guidance was not very popular. As Anne Barbeau Gardiner commented in a Touchstone review of The Atterbury Plot by Eveline Cruickshanks and Howard Erskine-Hill (2004):
"The year 1720 was an auspicious one for beginning a rebellion because of the widespread anger at George I over the crash of the South Sea Company. Large numbers of formerly well-to-do stockholders were suddenly destitute and blamed the king, who had been the governor of the failed scheme. Londoners were greeting the king with ominous silence, and aristocrats who had been hostile to “the Pretender” were suddenly trying to get his picture."
Invaders from the Continent, including Spanish forces, were organized and Atterbury was readily able to court disaffected supporters of the new king to the cause, but the plotters weren't able to raise the necessary funds and the French government informed George I of the plot. Atterbury ended up in prison and charged with treason. Because there was no real evidence of treason he was convicted in Parliament of a lesser charge and exiled.
In Paris, he became the leader of the Jacobite exiles there. James III invited him to stay with him in Rome, but the former Church of England bishop did not feel comfortable there. He died in Paris on February 22, 1732 but his remains were returned to England and he is buried in Westminster Abbey.
Although the Old Pretender James III was a solid Catholic and the Bishop a solid Anglican, Atterbury supported the legitimate claim of the Stuart heir to the throne. The same would be true during James II's Irish campaigns to reclaim his throne and would be for the Young Pretender, Bonnie Prince Charlie--staunch Anglicans and even Presbyterians in Scotland would defend the concept of primogeniture with their lives and their livelihoods.
Posted by Stephanie A. Mann at 2:05 AM