Manning as Newman's Equal, from CTS 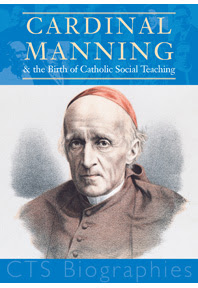 The Catholic Truth Society in the U.K. has published this new pocket-sized biography of Henry Cardinal Manning, who followed Blessed John Henry Newman into the Catholic Church and with whom Newman had some disagreements, shall we say. The author, Russell Sparkes, posted a two-part consideration of why Cardinal Manning should be of equal importance, in quite different ways, to Cardinal Newman:

Like many English Catholics, I suspect, I was both proud and delighted when the Pope beatified Cardinal Newman during his visit to Britain in September 2010. But at the same time I was also saddened by the thought of another Englishman, now almost totally neglected, whom I believe to be at least as worthy of this great honour as Newman.

This was Henry Manning, along with Newman one of the two “convert cardinals” who shaped the English Catholic Church into the form we know it today. Born a Protestant, and regarded as one of the most promising young clergymen in the Church of England, Manning was received into the Catholic Church in 1851. He became priest soon after, and to general surprise was appointed Archbishop of Westminster on Pope Pius IX’s personal insistence in 1865. He was a close contemporary of Newman’s, dying just a year after him in January 1892. Yet while books and articles about Newman continue to pour off the press, Manning’s great works, and indeed his name, are largely forgotten today. To those who knew them both in the flesh it was very different; Newman died a relatively obscure figure, while after Manning’s death the crowds thronged his funeral procession through the streets of London in a way that had been seen only once before for the funeral of the Duke of Wellington 40 years earlier.

In the last half of his article, Russell Sparkes points out that although Cardinal Manning was not a theologian to compare with Newman, the former’s vision of the holy calling of the priest makes him a model to follow even today.

One of the first sermons he gave as a young priest describes the standards that he always lived by, and which he expected from other priests:

“The mind of Christ must be transfused into our own. There must be somewhat of the same intense love of perishing sinners, of the same patient endurance of moral evil, and unwearied striving to bring the impenitent to God … What a mission, Brethren, is ours!”

Sounds intriguing! I would take issue about the "obscurity" of Newman's death and funeral. The London Times eulogized him, 14 bishops were present at his funeral Mass, and 15,000 people lined the streets of Birmingham as his cortege carred him to Rednal. It was in Birmingham, not in London--but it was not obscure!
Posted by Stephanie A. Mann at 2:11 AM