Ask Not For Whom the Bell Tolls 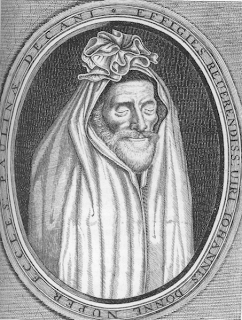 No man is an island, entire of itself; every man is a piece of the continent, a part of the main; if a clod be washed away by the sea, Europe is the less, as well as if a promontory were, as well as if a manor of thy friend's or of thine own were; any man's death diminishes me, because I am involved in mankind, and therefore never send to know for whom the bell tolls; it tolls for thee. --Meditation Number XVII, from John Donne's Devotions Upon Emergent Occasions.

John Donne was born in Bread Street, London in 1572 to a prosperous Roman Catholic family - a precarious thing at a time when anti-Catholic sentiment was rife in England. His father, John Donne, was a well-to-do ironmonger and citizen of London. Donne's father died suddenly in 1576, and left the three children to be raised by their mother, Elizabeth, who was the daughter of epigrammatist and playwright John Heywood and a relative of Sir Thomas More.

Donne's first teachers were Jesuits. At the age of 11, Donne and his younger brother Henry were entered at Hart Hall, University of Oxford, where Donne studied for three years. He spent the next three years at the University of Cambridge, but took no degree at either university because he would not take the Oath of Supremacy required at graduation. He was admitted to study law as a member of Thavies Inn (1591) and Lincoln's Inn (1592), and it seemed natural that Donne should embark upon a legal or diplomatic career.

In 1593, Donne's brother Henry died of a fever in prison after being arrested for giving sanctuary to a proscribed Catholic priest. This made Donne begin to question his faith.

Donne also made the bad decision of clandestinely marrying his employer's niece in 1601 and spent time in jail. He was not able to gain any preferment from James I, even though he wrote two anti-Catholic pamphlets, and therefore became a minister in the Church of England in 1615.

Donne reluctantly entered the ministry and was appointed a Royal Chaplain later that year. In 1616, he was appointed Reader in Divinity at Lincoln's Inn (Cambridge had conferred the degree of Doctor of Divinity on him two years earlier). Donne's style, full of elaborate metaphors and religious symbolism, his flair for drama, his wide learning and his quick wit soon established him as one of the greatest preachers of the era.

Then his wife died in 1617, just as the couple had gained some security. He was appointed Dean of St. Paul's in the City of London in 1621 and remained there until his death. Donne prepared for his death by having his portrait painted wearing a shroud. The portrait was used to create his monument. Of all the Metaphysical Poets (as Samuel Johnson disparagingly called them), Donne is my favorite. The wit of his conceits in his secular poetry and the depth of his devotion in his religious poetry are both delightful and stirring.
Posted by Stephanie A. Mann at 2:09 AM