Are You Making a List? I am. More Books. 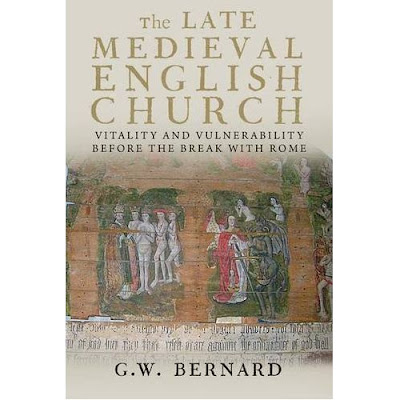 G. W. Bernard is going where Eamon Duffy has gone before in this forthcoming book: The Late Medieval English Church Vitality and Vulnerability Before the Break with Rome. From Yale University Press (due out in May in the UK):

The later medieval English church is invariably viewed through the lens of the Reformation that transformed it. But in this bold and provocative book historian G. W. Bernard examines it on its own terms, revealing a church with vibrant faith and great energy. Bernard looks at the structure of the church, the nature of royal control over it, the clergy and bishops, the intense devotion and deep-rooted practices of the laity, anti-clerical sentiment, and the prevalence of heresy. He argues that the Reformation was not inevitable, nor made unavoidable by the defectiveness, corruption, superstition or outdatedness of a church ripe for a fall: the late medieval church had both vitality and vulnerabilities, the one often linked to the other. The result is a thought-provoking study of a church and society in transformation.
And here is a provocative title: Heretic Queen: Queen Elizabeth I and the Wars of Religion, by 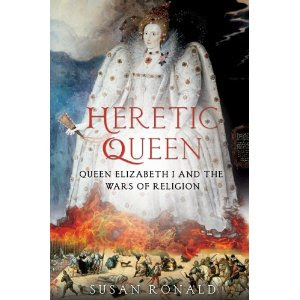 Susan Ronald due out in August from St. Martin's Press:
Elizabeth’s 1558 coronation procession was met with an extravagant outpouring of love. Only twenty-five years old, the young queen saw herself as their Protestant savior; aiming to provide the nation with new hope, prosperity, and independence from the foreign influence that had plagued her sister Mary’s reign. Given the scars of the Reformation, Elizabeth would need all of the powers of diplomacy and tact she could summon. Extravagant, witty, and hot-tempered, Elizabeth was the ultimate tyrant. Yet at the outset, in religious matters, she was unfathomably tolerant for her day. “There is only one Christ, Jesus, one faith,” Elizabeth once proclaimed. “All else is a dispute over trifles.” Heretic Queen is the highly personal, untold story of how Queen Elizabeth I secured the future of England as a world power. Susan Ronald paints the queen as a complex character whose apparent indecision was really a political tool that she wielded with great aplomb.
Posted by Stephanie A. Mann at 2:32 AM