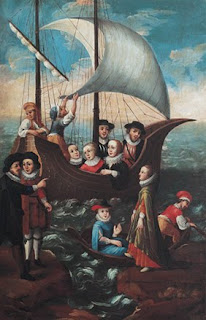 Preparing for a trip to our one and only local Barnes & Noble to buy my sister a couple of Downton Abbey-themed gifts for her birthday last week, I checked out the website for the BBC History Magazine, to see if I wanted to look at it while shopping there. Then I saw that next month's issue (March) has this preview:

James Kelly shows how a large number of Catholic women fled Protestant England to join European convents in the 17th and 18th centuries.

Looking up James Kelly led me to this website: Who Were the Nuns:

Since September 2008, the Arts and Humanities Research Council funded project team at Queen Mary has been making a comprehensive study of the membership of the English convents in exile. That is, the period between the opening of the first English convent in Brussels to the nuns' return to England as a result of the French Revolution and associated violence. Most were enclosed convents, in theory cut off from the outside world. However in practice the nuns were not isolated and their contacts and networks spread widely.

As well as studying the members and their families the project is collecting data on sponsors and patrons on both sides of the Channel.

This website will provide a range of materials for the history of the convents, including edited texts as they are finished and ultimately a fully searchable database of members.

We plan to develop the section inviting contributions from researchers with data they are willing to share with us.

And that site led to this article previously published by James Kelly:

Whereas people have a passing knowledge of the activities of Catholic male religious following the Reformation — such as the Jesuit Edmund Campion, dubbed the flower of England by Elizabeth I before his conversion to Catholicism and subsequent execution — little attention has been paid to the activities of Catholic women religious at this time. Men could head to the likes of the English College in Rome, the oldest English institution abroad, but what about women who wished to lead a religious life denied to them in England? What if families desired that, as well as their sons, their daughters too should be educated within the Catholic faith?

In 1598, the first English convent was established in Brussels and was to be followed by a further 21 establishments across Flanders and France with more than 4,000 women entering them over 200 years. Most were enclosed convents, in theory cut off from the outside world. However, in practice the nuns were not isolated and their contacts and networks spread widely. Here, these substantial communities of women found outlets for female expression often unavailable to their secular counterparts, until the French Revolution and its associated violence forced the convents back to England.

The published results of this study will be very expensive: $495.00 per three volume set!
Posted by Stephanie A. Mann at 2:15 AM