Book Review: History In His Hands 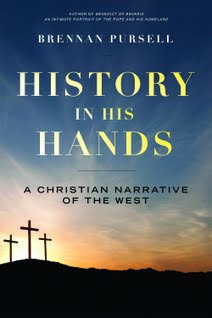 Subtitle: A Christian Narrative of the West

By Brennan Pursell, author of The Spanish Match, Benedict of Bavaria, and The Winter King.

Most professional historians write history as though God either does not exist or doesn’t matter. History in His Hands offers a radically different approach. Brennan Pursell, Harvard-trained historian and author of Benedict of Bavaria, shows how God’s directing hand ensures that history—and each person in history—has significance. We can discover the difference that God’s presence makes in several key issues in human history: time, space, war and peace, wealth and poverty, and human love and hatred.

As we discover that all of us share an identity as God’s creation, Dr. Pursell also challenges us to cease thinking in terms of radically distinct historical periods, whether ancient, medieval, or modern, and recognize how all people who have ever lived are part of the same story.

Finally, Dr. Pursell invites us to recognize how, for all the achievements of our own day, we remain as flawed as ever, and in need of recognizing God as the source of our existence and the shaper of our destinies.

I think an informed reader will get the most out of this book--one who already knows the outlines of the history of Western Civilization, even if it is based upon college-level textbooks that may take an anti-religious or a-religious view of history. A well-read and well-informed reader who has studied that history with a Christian worldview will also benefit greatly from reading this book and one who has studied Christopher Dawson will be almost completely satisfied with Pursell's work in this book. It is not a traditional history text--no footnotes, no index, no apparatus like maps and tables, and the table of contents doesn't even include page numbers (!), just an excellent select bibliography and a very clear teaching voice. This is a book to be read aloud. The style is so lucid and the narrative so direct. (Now how many history books do you ever say that of!)

I have a few minor arguments with Professor Pursell's interpretations (for example: the second son theory of the Crusades has been debunked, I thought {see page 125}). His chapter on the Enlightenment, the French Revolution, and Napoleon is excellent; he correctly traces the secularization of Western Culture to those historical landmarks. On the other hand, he barely mentions the American Revolution and the founding of the United States--the US just pops up fully formed like a mythical goddess during the section on the "Struggle for Freedom" in Chapter 9. In the last chapter, Pursell takes a prophetic stance, rationally analyzing the post-modern, post-human zeitgeist of the cultural elite.

Overall, Pursell completely debunks the Whig, progressive, "we're so much more advanced now" view of history while also introducing an element of mystery: why do some things happen? what is God's purpose in certain events of history? Since history IS in God's Hands, Pursell opens up this survey of western civ history to meditation and wonder. Highly recommended.

Introduction: God Matters (The Secular Narrative+Augustine and the Christian Narrative+Finding Truth in History)

1. God and Man (God, the Alpha, Love, and Reason + Cosmos and Earth + Adam and Eve + Suffering and Death + The Omega + Human "Prehistory" + Paleo- to Neolithic)

2. The Gift of Civilization (Babel + The "First" Civilizations + Mesopotamian Diversity + Unity in the Nile Valley + Around the World + Israel)

3. The Greeks Thought of Everything (In and Out of Ignorance + Archaic and Classical Poleis + The Birth of Western Philosophy + Socrates, Plato, and Aristotle + The Greek Legacy + The Hellenistic World)

4. The Romans Did Everything (Splendor and Squalor + From Republic to Principate + Western Convergence + Jesus of Nazareth + The Resurrection and the Church)

5. The West Diversifies (The Roman Imperial Temptation + the Growth of Christianity + Loving God as One + Rome's Miracle + The Empire Shatters + The Germanic Age in the West, 500-900 + Islam: Another Separation? + The Franks and the Lure of Empire + A New Era Comes)

6. Christendom Consolidates (The Feudal Age + For Better and for Worse: Church, State, and Warfare + The Crux of Centralization + The Papal Monarchy and the Church + A Christian Culture + Feudal Heights + Life Lived in Common + The Burden of Living)

7. A Tear in the Heart (Humanism and the Italian Renaissance + The Old Word and the New + Luther's Reformation + More Protestantisms + The Catholic "Counter-Reformation"? + Wars of Religion?)

8. Christendom Repudicated (New Worlds on Earth and Heaven? + The Scientific Revolution + The Eighteenth-Century Enlightenment -- Writers, Wits, and Renegades + The Coming of the French Revolution + Napoleon, The Revolution in Person)

9. The Perils of Wealth (A Century of Progress? + Still the Christian West + The Struggle for Freedom)

10. Slaughter and Surfeit (A Century of War: World War I and its Offspring + Number Two, and Then Some + Twentieth-Century Surfeit + Twenty-First Century Civilization Barbarism)

Select Bibliography
Posted by Stephanie A. Mann at 2:16 AM