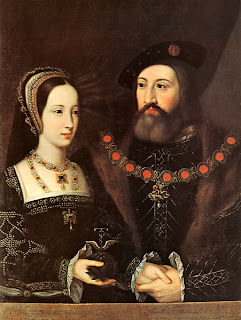 Henry VIII's sister Mary was born on March 18, 1496. She was the fifth child of Henry VII and Elizabeth of York. More here. Her life's story is romantic, I suppose, because she married for love after marrying for the state. Mary, the Dowager Queen of France and the Duchess of Suffolk sided with Katherine of Aragon during the crisis of the King's Great Matter, but died in 1533, before the denouement.

Henry VIII, in spite of his early disapproval of Mary and Charles Brandon marrying without his permission, chose to name her heirs in the succession, after his children of course, ignoring the primogeniture claims of his elder sister Margaret's heirs. Mary's daughter Frances married Henry Grey, the Marquess of Dorset and their daughter Jane was chosen by Edward VI to thwart his half-sister Mary's accession to the throne upon his death. But that's another story, told elsewhere.

Charles Major told the love story of Mary and Charles Brandon in the late nineteenth century novel, When Knighthood was in Flower which was made into a movie twice: the silent 1923 version with Marion Davies and the 1953 Walt Disney version with Glynis Johns and Richard Todd, titled "The Sword and the Rose."
Posted by Stephanie A. Mann at 2:02 AM