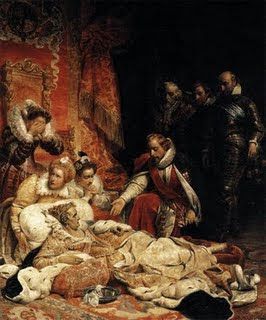 Accounts of the last days of Elizabeth I in March 1603 are rather chilling, as the painting by Paul Delaroche depicts. Becoming ill at Richmond Palace she refused the attendance of her physicians and she would not rest in bed but stood for hours, sometimes sitting down, but not resting or sleeping. Her ladies-in-waiting spread cushions on the floor and she laid on them four days. As Delaroche shows, her attendants were frantic with concern and stress.

Finally she was too weak to protest or refuse, even to speak, so they were able to move her to her bed. Richard Whitgift the Archbishop of Canterbury visited her bedside to prepare her for death. At some point she made some sign that James VI of Scotland should succeed her. The last Tudor monarch finally fell into a deep sleep on March 23 and died early the morning of March 24,1603.

Some fans of Elizabeth I, as some websites I've visited demonstrate, forget the contemporary mixture of reactions to her death. Certainly, since she reigned for almost 45 years, she was the only Queen many of her people had known. But her reputation had declined: the wars in Ireland and with Spain had taken their toll and her courtiers were weary of her later moods of melancholy and paranoia. The prospect of a new King with a family at Court led many to welcome the change in dynasty and rule occasioned by her death. Now, of course, with the two Elizabeth movies (anti-Catholic and manipulative as they are) and all the books written about her leadership and management skills, Elizbeth's reputation is very high, while James I's has ebbed. Disappointment with his reign led to a contemporary re-evaluation of her reign in the seventeeenth century, too.
Posted by Stephanie A. Mann at 2:03 AM