All the Graces of Oxford and Cambridge! 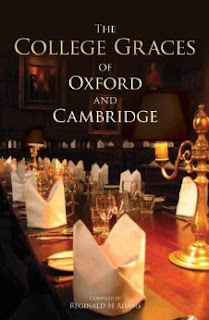 When I attended The Oxford Experience several years ago, I noticed they maintained a tradition of saying a very Christian grace before the more formal meals, with the High Table and the Final Banquet:

At Oxford Experience High Table Dinners and Final Dinners the shorter version of the Christ Church Latin Grace is read:

Here is the translation:

We unhappy and unworthy people do give thee most reverent thanks, almighty God, our heavenly Father, for the victuals which thou hast bestowed on us for the sustenance of the body, at the same time beseeching thee that we may use them soberly, modestly and gratefully. Through Jesus Christ our Lord, Amen.

This even though the participants had many different--or no--faith backgrounds.

The full grace of Christ Church is surely in this book:

The custom of formal dining at Oxford and Cambridge dates back to the earliest days of college life. Before each dinner, according to ancient statutes, grace must be said in Latin, and, although the text and nature of grace for each college has changed over the years, the tradition itself remains current to this day.

Following a historical introduction, The College Graces of Oxford and Cambridge reproduces in chronological order the full Latin texts of all the graces alongside facing English-language translations. Also included are the special graces reserved for feast days, as well as an explanation of some of the traditions that accompany them, including the trumpeters that summon students to dinner to the use of the Sconce Cup and the Rose Bowl.

From the twelfth-century monastic texts and the two-word graces of the nineteenth century to the new graces written for the modern age, this meticulous collection reveals how the tradition of the Latin grace has survived and evolved over the centuries and offers a rare glimpse inside the private halls of Oxford and Cambridge.

The University of Chicago Press is distributing the book for the Bodleian Library.

Of course, one reason such a prayer before meals creates no opposition is that no one knows what the Latin means! Queens College at Cambridge provides a special page just for those students who don't know Latin. However, in 2009, one college at Cambridge gave up its tradition of Latin grace, according to this story in The Telegraph.
Posted by Stephanie A. Mann at 12:30 AM