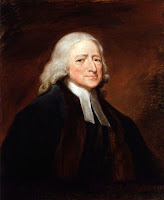 John Wesley founded the first Oxford Movement to revive the Church of England in the 18th century. Like John Henry Newman and his confreres in the 19th century, Wesley and his followers sought to emphasize the reality of Christianity in the Church of England. The 19th century Oxford or Tractarian movement also sought to re-inforce the authority of the bishops as successors of the apostles, while Wesley also looked back to the early Church and the Fathers.

While attending Christ Church at the University of Oxford he founded a "Holy Club" dedicated to reading the Holy Bible methodically, praying together, practicing ascetism, and helping the poor. That the Holy Club was mocked and considered too enthusiastic is an indication of the sad state of affairs in the Church of England at that time. Wesley turned that mockery into the name of his movement, however--Methodism. He was ordained a deacon in the Church of England in 1725 and then ordained as a priest in 1728.
Wesley preached in open areas--"Field Preaching"--along with George Whitefield; but the two men disagreed on the crucial issue of soteriology, the theology of how we are saved. Wesley was an Arminian while Whitefield was a Calvinist. It is fascinating that one of Wesley's favorite devotional works was The Imitation of Christ, a manifestly Catholic book with its emphasis on worship and adoration of Jesus Christ in the Holy Eucharist.
He never intended to found a separate Christian church; Wesley wanted to revive the Church of England and he died in that church. By the time he died or soon thereafter, however, because the Church of England prevented "Methodist" ministers from ordination, there was a de facto Methodist Church. John Welsey and his brother Charles are honored on the Church of England's calendar, May 24, as Evangelists and Hymn Writers.
Posted by Stephanie A. Mann at 2:04 AM