The Master Builder of Priest's Holes 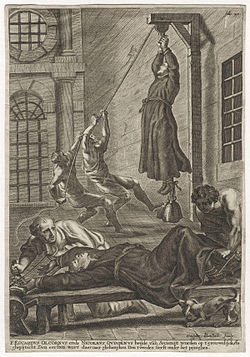 St. Nicholas Owen died of torture in the Tower of London on March 2, 1606. This article from the National Catholic Register tells his story:

"St. Nicholas Owen was one of many who suffered and died in the Tower. He was known as “Little John.” He was a tiny slip of a Jesuit, but, as the old hagiographies commonly attested, he was big of heart. Owen was slightly taller than a dwarf and suffered from a hernia and a badly set leg, fractured when a horse fell on him. On March 2, 1606, Nicholas Owen was tortured to death in the Tower of London. He had, in fact, already been here before — when he helped two Jesuit priests escape. . . .

"At night, St. Nicholas would create small hiding places — trap doors, sliding doors, hidden crawl spaces and subterranean passages — in order to hide priests and other Catholic fugitives from priest hunters. He would use trompe l’oeil: perspective and many of the modern principles of stage illusion design that magicians often take for granted. Whenever St. Nicholas would design and build such hiding places, he would always begin with prayer and receive the Eucharist. Because of his incredible building skills, he was even able to help two Jesuit priests escape from the Tower. "

St. Nicholas Owen was captured in the aftermath of the Gunpowder Plot. The English government rejoiced when he was captured--they hoped to find out where he had built all those hiding places. Once they found out where they were, they could accuse the owners of treason, seize their property, add it to their holdings, and destroy the network of safe houses for Catholics and Catholic priests in England. Because of his infirmity, it was illegal to torture him, but they did it anyway--and then tried to indicate that he had committed suicide!

The image above depicts the torture of St. Edward Oldcorne, who would finally be executed on April 7, 1607, and St. Nicholas Owen. The engraving is by Gaspar Bouttats and does not represent St. Nicholas's true physical stature.
Posted by Stephanie A. Mann at 2:12 AM