A Guide to Catholic London 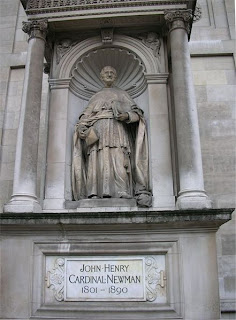 In preparation for visits to London during the Olympics this summer, the Catholic News Service offers this guide by Simon Caldwell to important churches and sites in connection with Catholic history:

LONDON (CNS) -- Visitors to the 2012 Olympic Games might be surprised to discover the extent to which London has been marked by the Catholic faith over the centuries. Riding the trains of the London Underground they notice stations with names such as Temple, Blackfriars, Charing Cross and Covent Garden. Above ground, the traces of Catholicism are yet more noticeable: Whitefriars, Greyfriars, Ave Maria Lane and Paternoster Square all denote a rich Catholic heritage that precedes the Reformation.

Catholics never left London, and during the 16th and 17th centuries they soaked the city with their blood, with 105 beatified and canonized martyrs dying on the Tyburn gallows, while many others were executed in other parts of the capital. However, the hope and new confidence that was ushered in with the "second spring" of the 19th century means that, today, stunning Catholic cathedrals and churches again adorn the city landscape. Here are a number of sites well worth a visit, not listed in order of importance or prominence:

1. Tyburn Convent. This is the motherhouse of the Adorers of the Sacred Heart of Jesus of Montmartre, an order of cloistered Benedictine nuns, and it stands just yards from the site of the infamous "Tyburn Tree" on which more than a hundred Catholics died for their faith during the Reformation. It houses the Martyrs' Crypt, which contains bones, hair, scraps of bloodied shirts, fragments of rope and other such relics salvaged secretly by Catholics and preserved for generations. The convent is increasingly popular with visitors from the U.S., and Boston Cardinal Sean P. O'Malley often asks to celebrate Mass there when is passing through London. The nuns will show visitors around the ground. http://www.tyburnconvent.org.uk/

2. The Church of the Immaculate Conception, Farm Street. Because of its proximity to the U.S. Embassy, the mother church of the English Jesuit province is sometimes considered the "American church." It is worth a visit because it is the finest Catholic example of the Victorian Gothic Revival in London and one of the most beautiful churches in the city, the grandeur of its architecture exuding the joyful hope of English Catholics as they emerged from a long period of suffering. http://www.farmstreet.org.uk/

3. Westminster Cathedral. A Byzantine-style structure designed by John Francis Bentley and opened in 1903, this is the mother church of the Catholic Church in England and Wales. It is not yet completed, and mosaics are being added all the time. It is the burial place of Cardinal George Basil Hume and the other archbishops of Westminster and also of St. John Southworth, a 17th-century martyr. Take the elevator up the bell tower (the bell is named Edward after St. Edward the Confessor, patron of the archdiocese) for a spectacular view across to Buckingham Palace. http://www.westminstercathedral.org.uk/

He also mentions the London (Brompton) Oratory--the picture above is the statue of Blessed John Henry Newman there--and a few other sites I appreciated:

At London Charterhouse there are still the remains of the Carthusian priory where St. John Houghton celebrated a Mass of the Holy Spirit before refusing to take the oath attached to the Act of Succession, resulting in him becoming the first martyr of the Reformation, May 4, 1535.

In London's West End is the church of Our Lady of the Assumption and St. Gregory, Warwick Street. This was formerly the chapel of the Bavarian and Portuguese embassies and was, for a period, one of the few places in London where Catholics were free to attend Mass. It was destroyed in the Gordon Riots and rebuilt but still offers good examples of English Baroque architecture. . . .

Not far away is the Anglican church of St. Giles in the Fields. Eleven Catholic martyrs are buried against its northern wall, including four Jesuits and their provincial who were executed June 20, 1679, amid the hysteria of the fabricated "Popish Plot" of Titus Oates.

Read the rest here: sounds like a great itinerary! I would never even see an Olympic event.
Posted by Stephanie A. Mann at 2:16 AM