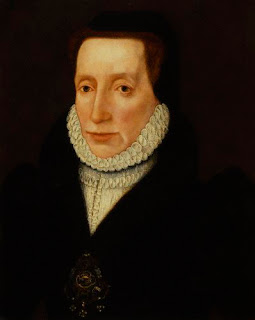 Margaret Douglas, granddaughter of Henry VII, died on March 7, 1578. She was the daughter of Margaret Tudor and Archibald Douglas, the 6th Earl of Angus in Scotland, (born on October 18, 1515 in Northumberland) and married Matthew Stuart, the 4th Earl of Lennox--who would be regent for James VI of Scotland from 1570 to 1571. Her eldest son was Henry Stuart, Lord Darnley, who would be the second husband of Mary, Queen of Scots and father of James I and VI. Her younger son Charles was Arbella Stuart's father. Her title in nobility was the Countess of Lennox.

Those are the momentous statistics: the back story is even more interesting. Margaret lived at the Tudor Court and was a companion to her cousin Mary, Henry VIII and Catherine of Aragon's daughter. She got in trouble with her uncle Henry VIII twice when she had affairs or arranged marriages without his permission with Lord Thomas Howard and then with his half-nephew Charles Howard, Catherine Howard's brother. Thomas was sent to Tower of London in 1536 and died there of a fever.

During the reign of Mary I, Margaret was also at Court. Mary would have preferred that Margaret succeed her because she was Catholic and had the claims of legitimacy and primogeniture, but she was obedient to her father's Will and the succession as devised by Parliament. Margaret was confined to the Tower of London during the reign of Elizabeth I because she had arranged her son's marriage to Elizabeth's rival, Mary of Scotland, but was released after her son Henry died in Scotland. Margaret died in debt but Elizabeth paid for a noble funeral and she is buried in Westminster Abbey, where the inscription panels provide all her vital statistics:

"HEER LYETH THE NOBLE LADY MARGARET, COUNTESSE OF LEVENOX, DAUGHTER AND SOLE HEIRE OF ARCHIBALD EARLE OF ANGUISE [Angus], BY MARGARET Q.OF SCOTTES HIS WIFE THAT WAS ELDEST DAUGHTER TO KING HENRY THE 7, WHOE BARE UNTO MATHEW EARLE OF LEVENOX HER HUSBAND 4 SONNES AND 4 DAUGHTERS. THIS LADY HAD TO HER GREAT GRANDFATHER K.EDWARD THE 4, TO HER GRANDFATHER K.HENRY THE 7, TO HER UNCLE K.HENRY THE 8, TO HER COUSIN GERMANE K.EDWARD THE 6, TO HER BROTHER K.JAMES OF SCOTLAND THE V, TO HER SONNE KING HENRY THE FIRST [ie.Lord Darnley], TO HER GRANDCHILD K.JAMES THE 6. HAVINGE TO HER GREATE GRANDMOTHER AND GRANDMOTHER 2 QUEENES BOTH NAMED ELIZABETH, TO HER MOTHER MARGARET Q.OF SCOTTS, TO HER AUNT MARYE THE FRENCHE Q, TO HER COUSYNS GERMANES MARY AND ELIZABETH QUEENES OF ENGLAND, TO HER NEECE AND DAUGHTER IN LAW MARY Q.OF SCOTTS. HENRY SECOND SONNE TO THIS LADY WAS K.OF SCOTTS AND FATHER TO JAMES THE 6 NOW KING. THIS HENRY WAS MURTHERED AT THE AGE OF 21 YEARES. CHARLES HER YOUNGEST SONNE WAS EARLE OF LEVENOX FATHER TO THE LADIE ARBELL. HE DYED AT THE AGE OF 21 YEARES AND IS HERE INTOMBED".
Posted by Stephanie A. Mann at 2:06 AM

Email ThisBlogThis!Share to TwitterShare to FacebookShare to Pinterest
Labels: Henry VIII, Lord Darnley, Mary I, the Tower of London, The Tudor Dynasty