Not for the Faint of Heart: Blesseds Thomas Pilchard and Matthew Flathers 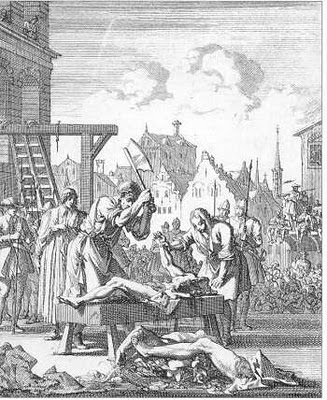 The Catholic Encyclopedia describes the life and death of Blessed Thomas Pilchard or Pilcher, incuding among the 85 Martyrs of England and Wales beatified by Blessed John Paul II in 1987:
He was born at Battle, Sussex, 1557; died at Dorchester, 21 March 1586-7. He became a Fellow of Balliol College, Oxford, in 1576, and took the degree of M.A., in 1579, resigning his fellowship the following year. He arrived at Reims 20 November, 1581, and was ordained priest at Laon, March, 1583, and was sent on the mission. He was arrested soon after, and banished; but returned almost immediately. He was again arrested early in March, 1586-7, and imprisoned in Dorchester Gaol, and in the fortnight between committal to prison and condemnation converted thirty persons. He was so cruelly drawn upon the hurdle that he was fainting when he came to the place of execution. When the rope was cut, being still alive he stood erect under the scaffold. The executioner, a cook, carried out the sentence so clumsily that the victim, turning to the sheriff, exclaimed "Is this then your justice, Mr. Sheriff?" According to another account "the priest raised himself and putting out his hands cast forward his own bowels, crying 'Miserere mei'". Father William Warford, a contemporary of Blessed Thomas Pilchard, says: "There was not a priest in the whole West of England, who, to my knowledge, was his equal in virtue."
The Catholic Encyclopedia records another brutal execution on March 21, in 1607, of Blessed Matthew Flathers in York:
An English priest and martyr; b. probably c. 1580 at Weston, Yorkshire, England; d. at York, 21 March, 1607. He was educated at Douai, and ordained at Arras, 25 March, 1606. Three months later he was sent to English mission, but was discovered almost immediately by the emissaries of the Government, who, after the Gunpowder Plot, had redoubled their vigilance in hunting down the priests of the proscribed religion. He was brought to trial, under the statute of 27 Elizabeth, on the charge of receiving orders abroad, and condemned to death. By an act of unusual clemency, this sentence was commuted to banishment for life; but after a brief exile, the undaunted priest returned to England in order to fulfil his mission, and, after ministering for a short time to his oppressed coreligionists in Yorkshire was again apprehended. Brought to trial at York on the charge of being ordained abroad and exercising priestly functions in England, Flathers was offered his life on condition that he take the recently enacted Oath of Allegiance. On his refusal, he was condemned to death and taken to the common place of execution outside Micklegate Bar, York. The usual punishment of hanging, drawing, and quartering seems to have been carried out in a peculiarly brutal manner, and eyewitnesses relate how the tragic spectacle excited the commiseration of the crowds of Protestant spectators.
Remember that hanging, drawing and quartering was live vivisection: a fumbling, inept executioner could prolong the suffering. It was a mercy if the hangman allowed the victim to die while hanging, or at least be unconscious.
Posted by Stephanie A. Mann at 2:11 AM