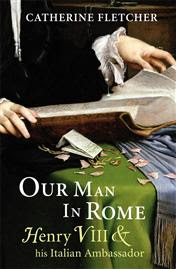 These two book covers with different titles actually contain the same book. Our Man in Rome: Henry VIII & His Italian Ambassador is the UK version, which is available now. The Divorce of Henry VIII: The Untold Story from Inside the Vatican is the US version, which will be available soon. The author, Catherine Fletcher, provides this background on her website:

Our Man in Rome is set in the six-year period of Henry VIII’s divorce from Catherine of Aragon. It's the story of Gregorio Casali, Henry VIII’s ambassador in Rome from 1525 to 1533, but also the first book-length account of the diplomatic intrigues behind the divorce for several decades.

Divorce. Deceit. Diplomacy. 1527. Gregorio ‘The Cavalier’ Casali is Henry VIII’s man in Rome. An Italian freelance diplomat, he charmed his way into the English service before he was twenty. But now he faces an almighty challe 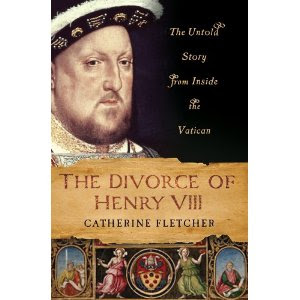 nge. Henry wants a divorce from Catherine of Aragon, and Casali must persuade Pope Clement VII of his master’s case. Set against the backdrop of war-torn Renaissance Italy, Our Man in Rome weaves together tales from the grubby underbelly of Tudor politics with a gripping family saga to reveal the extraordinary true story behind history’s most infamous divorce. Through six years of cajoling, threats and bribery, Casali lives by his wits. He manoeuvres his brothers into lucrative diplomatic postings, plays off one master against another, dodges spies, bandits and noblemen alike. But as the years pass and Henry’s case drags on, his loyalties are increasingly suspected. What will be Casali’s fate? Drawing on hundreds of hitherto-unknown archive documents, Our Man in Rome reconstructs his tumultuous life among the great and powerful at this turning point for European history. From the besieged Castel Sant’Angelo in Rome to the splendours of Greenwich Palace, we follow his trail in the service of Henry VIII. Lavish ceremony and glamorous parties stand in contrast to the daily strains of embassy life, as Casali pawns family silver to pay the bills, fights off rapacious in-laws and defends himself in the face of Anne Boleyn’s wrath. This stunning book will make you think anew about Tudor history.

It's interesting to have stumbled upon this book in Amazon.com's new releases/coming soon list at about the same time that the Vatican Archives has opened an exhibit outside the Vatican at the Capitoline Museums, called "Lux in Arcana" and one of the documents is the letter signed by 83 of Henry VIII's courtiers urging Pope Clement VII (note that the exhibition website cites the wrong Clement!) to grant the decree of nullity of his marriage to Katherine of Aragon.

It was the year 1530. For months the matrimonial case of Henry VIII of England versus Catherine of Aragon had been pending in the hands of pope Clement VIII. The king, obsessed more than ever by what he called his “Secret Matter,” wanted to obtain at all costs the pope’s annulment of his first marriage so that he could marry the young Anne Boleyn and hopefully sire the longed-for heir to the throne. It was thus necessary to step up the pressure on the pope. On June 12th, Henry summoned a number of his supporters to court, mostly members of the House of Lords, and asked them to write to Clement VIII, urging him to adjudicate the king’s suit by granting him an annulment. A draft of the proposed letter was read out to the meeting, but some of the attendees criticized its overly aggressive tones; it suggested that a council might be summoned to act against the pope if he did not grant Henry’s wish.

After a few days’ adjournment - perhaps the time needed to redraft the letter - the meeting sat again on June 16th, the Sunday of Corpus Christi. This time, though, Henry took a shrewder approach. To avoid the risk of further delay, he spoke separately to each member. It was impossible to resist his vehement arguments; that day, the letter received a good number of the signatures Henry sought. But the king wasn’t satisfied; the document had to be signed and sealed even by the men who hadn’t been able to come to court. The absentees were reached at their homes by royal commissioners dispatched to every corner of the kingdom. For example, during the night of June 16th the conspicuous parchment was presented to cardinal Thomas Wolsey at his house at Esher; Wolsey signed it in the space reserved for archbishops and pressed his seal into the wax with which the royal messengers had already filled the tin skippet assigned to him.

The document, bearing all its signatures and seals, was dated and dispatched a month later. The signers included nearly 70% of the members of the House of Lords: all of the kingdom’s dukes, marquesses and earls, most of the barons and the abbots in charge of the major abbeys. None of the signers could have imagined the fate that would befall some of them a few years later. George Boleyn, viscount of Rochford and brother of the future Queen Anne, was executed with her for high treason, aggravated by the further charge of having committed incest with his sister. Richard Whiting, abbot of Glastonbury, was hanged, drawn and quartered for refusing to turn the abbey and its property over to the Crown. Abbot Hugh Cook of Reading was hung as a traitor in his own abbey, his body left to rot on the gallows. Henry Courtenay, Marquess of Exeter, and Henry Pole, Baron Montague, wholehearted opponents of the “Anglican Schism,” were beheaded for having taken part in a conspiracy against the king. The document has been called “the most impressive one ever circulated by the Tudors.” Its 83 signatures embody the stories of the protagonists and the victims of some of the bloodiest decades in English history. [my emphasis added]

More here about the King's Great Matter from "inside the Vatican" now outside the Vatican! The website is excellent!
Posted by Stephanie A. Mann at 2:51 AM