Thomas Ken, Non-juror and Former Bishop of Bath and Wells 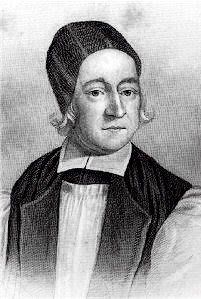 Along with the other bishops and the Archbishop of Canterbury, he was arrested by James II and placed the Tower of London and charged with rebellion and sedition. At their trial, the bishops were acquitted; a real blow to James's plans. Yet, Ken had sworn an oath to James as the rightful king and he did not accept the parliamentary arrangements that brought James' son-in-law and "ungrateful" daughter to the throne.

He was born in 1637 and reared by his half-sister Anne and her husband the well-known angler Izaak Walton. He became a clergyman and served for a year at the Hague as chaplain to Mary, Princess of England and Queen of Holland, niece of King Charles II of England and wife of the Dutch King William of Orange. During this year he publicly rebuked King William for his treatment of his wife the said Mary, which may be why he was chaplain there for only a year. Upon his return to England, he was made Royal Chaplain to King Charles. The King had a mistress, Nell Gwyn, and for his convenience wished to lodge her in his chaplain's residence. Thomas sent the King a sharp refusal, saying that it was not suitable that the Royal Chaplain should double as the Royal Pimp. Charles admired his honesty and bluntness, and when the bishopric of Bath and Wells became available soon after, he declared, "None shall have it but that little man who refused lodging to poor Nellie!" Ken was accordingly made a bishop. When Charles was on his deathbed, it was Ken whom he asked to be with him and prepare him for death.
(Nevertheless he was asked to leave the room and some point when Charles II was received into the Catholic Church, according to reports.)
Today, he is best known for several hymns that he wrote, such as those beginning:


All praise to thee, who safe hast kept
and hast refreshed me while I slept!
Grant, Lord, when I from death shall wake,
I may of endless life partake.


Praise God, from Whom all blessings flow.
Praise Him, all creatures here below.
Praise Him above, ye heavenly host.
Praise Father, Son, and Holy Ghost.

One of my favorite movie moments of all time is connected with that last hymn--at the end of Shenandoah(1965), when the congregation starts singing it as Boy, the youngest son of the James Stewart character, Charlie Anderson, limps into the church.
Thomas Ken is honored on the calendar of the Episcopalian Church of the USA on March 21st.
Posted by Stephanie A. Mann at 2:10 AM