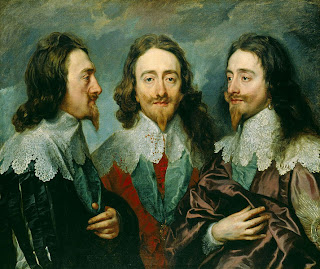 Anthony Van Dyke was born on March 22, 1599 in Antwerp. In 1632, he visited England for the second time and soon became Charles I's official court and portrait painter, developing a flattering style that influenced later painters like Kneller and Lely. In 2009, the Tate Britain held an exhibition titled "Van Dyck and Britain":

Sir Anthony van Dyck (1599-1641) was the greatest painter in seventeenth-century Britain. Though trained in Flanders, he had a huge impact on British cultural life as the principal painter at King Charles I’s ostensibly elegant court, where his impact was similar to that of Hans Holbein at the court of Henry VIII.

Van Dyck was born and trained in the great art centre of Antwerp. He made a brief visit to London in 1620-21 before returning in 1632 to King Charles I’s court. Intensely ambitious and hugely productive, he re-invented portrait-painting in Britain, retaining his pre-eminence until his premature death at the age of 42. Working in a period of intense political ferment during the run-up to the British Civil War, van Dyck portrayed many of the leading characters of the period. His iconic portraits of King Charles I have shaped our view of the Stuart monarchy, while the compositions he used influenced many future generations of British painters.

This visually sumptuous exhibition brings together some of the finest and most magnificent paintings that van Dyck produced during his years in Britain. It also reveals his continuing visual legacy through portraits by artists from the eighteenth to twentieth centuries, including Sir Joshua Reynolds and John Singer Sargent. Featuring loans from The Royal Collection and The National Trust, this exhibition explores the context of van Dyck’s key English works, examining his innovative approach to painting the British elite. It also looks at his use of costume and his luscious, sparkling depiction of the rich fabrics of the period, and how his art was itself influenced by more local British painting.

Of his style and method of portraying the royal family, the exhibition notes:

These royal portraits show van Dyck's ability to mix fantasy and reality in the representation of kingship. Charles I relied upon van Dyck to provide the idealising portraits that would bolster his public image. These paintings embodied the kings view of divine rule and of Neoplatonic ideas about the self-regulation of the passions. The portraits suggest a happy, settled ruling family at the head of a nation at ease with itself and with its king.

Of course, we know that wasn't so:

It was all an illusion. 'Loving rule' may have been implied by the portraits of the king and queen, the image of Cupid and Psyche, or the masques in which the royal couple participated at court. In fact, Charless relationship with Parliament had broken down, leaving him increasingly isolated. There was fear of Catholic conspiracies and discontent that the Protestant king had taken a Catholic wife.

Charles I's favor to a foreign and Catholic painter just compounded the Parliamentary view that Charles was too Catholic: the Puritans could point to his use of a Catholic artist as another cause of their discontent with the king's rule.

Several of his paintings are in the National Gallery in London. Although Queen Henrietta Maria's chapel with its baroque Catholic paintings was ransacked and destroyed, the Royal collection gathered by Charles, including all the Royal Portraits seemed to have survived.
Posted by Stephanie A. Mann at 2:10 AM