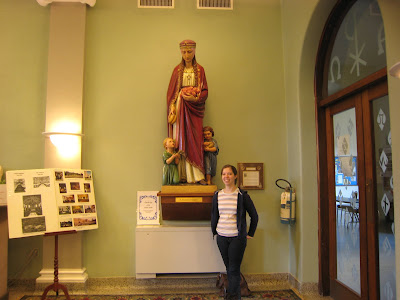 I spoke to Kris McGregor of Inside the Pages on KVSS, Spirit Catholic Radio in Omaha, and she also loaded our interview on her great website Discerning Hearts, with this introduction:

The wonderfully intrepid Stephanie Mann joins us once again to discuss “Supremacy and Survival: How Catholic Endured the English Reformation”. The lessons of the past have much to teach us today, especially those experienced in England during the times of the Tudors and Stuarts. Religious liberty was the issue then, and is the issue today in many places throughout the world…even in the U.S. It’s not just about freedom of speech, it’s about the freedom of religion. What will they be writing about 500 years from now about the Catholics in America? Interesting…

Also, while my husband and I were in Ohio this week, I drove from Columbus (where Mark was in meetings) to Cincinnati to meet Matt Swaim and Annie Mitchell of the Son Rise Morning Show at Sacred Heart Radio! Brian Patrick was out of town that afternoon, so we did not meet. Annie showed me around the retreat center where Sacred Heart Radio has its studios. The retreat center, Our Lady of the Holy Spirit, was formerly the seminary for the Archdiocese of Cincinnati and was filled with great artwork, some of it from closed parishes. After the tour, which included the statue of St. Elizabeth of Hungary, pictured above, in the center's library (that's Anne standing beneath it), she drove me to downtown Cincy to meet Matt and his little baby Zeke at Moerlein Lager House, which has just opened--next to The Great American Ballpark and not far from the Paul Brown Stadium on the bank of the Ohio River. Kentucky's right across the way and the John A. Roebling Suspension Bridge will get you there.
Posted by Stephanie A. Mann at 2:18 AM