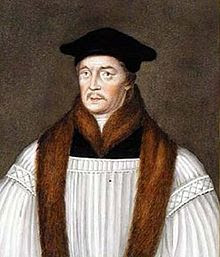 Blessed Germain or Jermyn or German Gardiner was executed at Tyburn on March 7, 1544 at Tyburn. He was beatified in 1886 by Pope Leo XIII. As Bishop of Winchester Stephen Gardiner's nephew and secretary, he became involved in the Prebendaries' Plot of 1543 and was hung, drawn, and quartered for the denial of Henry VIII's Supremacy over the Church of England.

The Prebendaries' Plot was named after the five prebendary canons of Canterbury Cathedral (including William Hadleigh, a monk at Christchurch Canterbury prior to the monastery's dissolution) who formed its core. Others involved were two holders of the new cathedral office of "six preacher" (created in 1541), along with various local non-cathedral priests and Kentish gentlemen (eg Thomas Moyle, Edward Thwaites and Cyriac Pettit). Simultaneous agitation at the court in Windsor, and the conspiracy in general, was led covertly by Stephen Gardiner, bishop of Winchester.

Henry VIII's chaplain Richard Cox was charged with investigating and suppressing it, and his success (240 priests and 60 laypeople of both sexes were accused of involvement) led to his being made Cranmer's chancellor (and later, under Elizabeth, bishop of Ely). Gardiner survived, though his relation German Gardiner, who had acted as his secretary and intermediary to the plotters in Kent, was executed in 1544for questioning the Royal Supremacy.

So Blessed Germain Gardiner was left as the scapegoat to suffer for the plot, while Henry VIII, still valuing Bishop Stephen Gardiner's efforts in supporting both Henry's "Great Matter" and his more "conservative" reformation of the Church, spared his uncle.

Along with Gardiner, Blessed John Larke, friend of St. Thomas More and former rector of Chelsea (More's parish) and Blessed John Ireland, also connected with St. Thomas More and Chelsea, were executed for denying Henry VIII's Supremacy. Robert Singleton, a parish priest, was also executed under a charge of treason, but he has not been beatified. John Heywood, the playwright and grandfather of John Donne was also on the scaffold at Tyburn sentenced to death, but he recanted and was spared. He also had connections to St. Thomas More and survived the ups and downs of the Tudor succession until Elizabeth I's reign. Then he went into exile in Mechelen, Belgium where he died around 1580.
Posted by Stephanie A. Mann at 2:13 AM