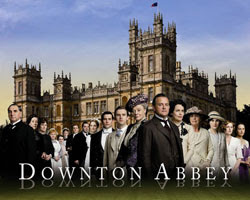 I just started watching the PBS Masterpiece Theatre series Downton Abbey during its second season. The building in which the show is filmed is obviously not an abbey, but it could be on former abbey land. That means that sometime in the sixteenth century, a noble bought the land and buildings from Henry VIII through his Vice Regent in Spiritual's Court of Augmentations. Monsignor Owen Campion of the Our Sunday Visitor newspaper recently reflected on that background in the power context of Henry VIII's reign:

Bringing into line the nobility and the religious communities, such as monasteries and convents that literally were sprinkled across the map of England, was something else. The monarch was not almighty.
Nobles owned, and often occupied, vast tracts of land. Untold thousands of people depended on them. For generations, nobles had developed ties with the people living on their lands or working for them. (Admittedly, not every circumstance was happy.)
The nobles inevitably were rich. The king needed revenues from taxes. Nobles sat in Parliament, in the House of Lords. The king needed their political support, especially in a matter then so revolutionary as breaking religious bonds with the pope.
Then there was the reality of the monasteries. The abbeys and convents were more than houses of prayer. They were magnets for local towns and regions. In them were schools. Often, there were hospitals, at least as such were known in the 16th century. In the monasteries, the poor found relief. They were centers of worship and devotion. Finally, many abbots sat in Parliament.
If unchecked, the monasteries very likely could frustrate the king as he sought to change religion in England.
So, he instituted a policy to dissolve the monasteries. It was an amazing, stupendous undertaking, as if Congress today ordered the closing of every college and university in this country. Brute force played a role. Resistance varied. For example, among the first martyrs of those days were Carthusians from an abbey. They would not acknowledge the king’s order separating the Church from Rome, so they were executed. . . .
As a result, the king in a relatively short period of time had at his disposal huge areas of land, once occupied by the monasteries, along with everything that the monasteries had owned.
A few of the monasteries were kept as Anglican churches, although the monks were expelled. Westminster Abbey is an example.
In many other cases, the king simply seized whatever had belonged to monasteries as his own. Then, on some occasions, he gave the land to nobles whom he wished to placate. Some real-life English nobles today own and occupy land once the site of a Catholic abbey.
In another OSV publication last year, I also wrote about the dissolution of the monasteries, in the November/December issue of The Catholic Answer Magazine: "Henry VIII's Achievement".
Posted by Stephanie A. Mann at 2:16 AM

Email ThisBlogThis!Share to TwitterShare to FacebookShare to Pinterest
Labels: dissolution of the monasteries, Downton Abbey, OSV, The Catholic Answer Magazine