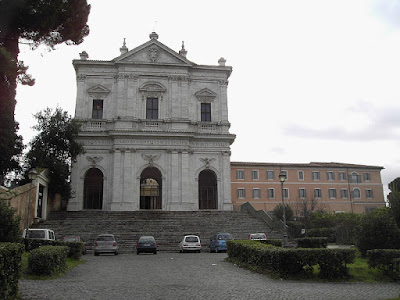 Archbishop Rowan Williams and Pope Benedict XVI will lead evening prayer together at the Church of San Gregorio Magno al Celio on Saturday 10 March, as part of a visit to Rome by the Archbishop this weekend.

The occasion forms part of the celebrations of the 1,000th anniversary of the Camaldolese (Benedictine) monastic family, who invited the Archbishop to travel to Rome to join the celebrations in recognition of the close connection of San Gregorio with the Church of England and the Anglican Communion. The ancient Roman monastery on the Caelian Hill which bears the name of Pope St Gregory the Great was the place from which Gregory (himself a monk) sent St Augustine of Canterbury and a party of fellow Benedictine monks to Britain in the late 590s.

You might remember that both Pope Benedict and the Archbishop commented upon that crucial link between Rome and England, between the Papacy (or at least the Bishop of Rome) and Christianity in England during the vespers at Westminster Abbey in September of 2010. The Archbishop of Canterbury also spoke at the same church, San Gregorio Magno al Celio, on Sunday, March 11 on the virtues of monasticism.

And from the Vatican News website, some background on the church and the Camaldolese order along with Pope Benedict's homily.

Also in the news re: Anglicans in Rome--the Pope has invited the Choir of Westminster Abbey to sing along with the Choir of the Sistine Chapel at the Vatican for the Feast of Sts. Peter and Paul. News and reaction here--this is a first. The Sistine Chapel Choir has NEVER had another choir sing with it:

The two choirs will sing at First Vespers in the Basilica of St Paul Outside the Walls on June 28 and together again the next morning in the Vatican basilica during the papal Mass.

Note also that the Sistine Choir will sing at Westminster Abbey in May this year! According to the Westminster Abbey news website, this all began at those Vespers in 2010. The effects of Papal Visit in September 2010 continue to manifest.
Posted by Stephanie A. Mann at 2:11 AM