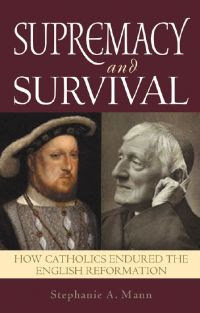 The persecution of Catholics began in 16th century England and tested the Church for over 250 years. Penal laws labeled Catholic believers as traitors and brought fines, imprisonment, and even execution. Prominent persons such as Thomas More, Edmund Campion, and Margaret Clitherow were martyred, while others quietly endured suspicion or harassment to teach and pass on their faith to others, but died peacefully in their beds.

The official persecution slowly subsided as threats to England's external power waned in the 17th and 18th centuries. In the 19th century, intellectual converts such as John Henry Newman and Henry Manning brought the merits of Catholicism a new respect in the eyes of Protestant public opinion. This enabled the unfolding of a wide-ranging apologetic that would fall to 20th century figures such as G.K. Chesterton, Hilaire Belloc, and Ronald Knox.
This book tells the story of the Catholic Church's survival and restoration in one land. It serves both as a lesson and a warning of the risks to faith and freedom when absolute power is given free reign.

Available for purchase in eBook formats from Amazon.com, BarnesandNoble.com, and the iBookstore app on your iPod or iPhone.

For signed copies: please contact me at englishreform(at)cox(dot)net and we can arrange something!

Praise for Supremacy and Survival: How Catholics Endured the English Reformation:

"This book is a gripping history of famous events in England that had ramifications reaching across the ocean and impacted religious freedom in America. There are so many real-life twists and turns that the book reads like a novel."--Ken Huck, host of Meet the Author on Radio Maria USA

“Stephanie Mann succeeds in describing the aftermath of the English Reformation in a way which is informative, convincing, and readable. Her account is surprisingly thorough for such a short book, and includes a whole range of political and cultural consequences of the English Catholic Revival – a truly amazing event which continues to this day.” --Father John Vidmar, OP, Associate Professor of History at Providence College, author of English Catholic Historians and the English Reformation, 1585-1954 and The Catholic Church through the Ages

Supremacy and Survival is a “very fine book. Thorough, to the point and hopeful. It should be on every Catholic school and home schooler’s curriculum!”
--Father C. John McCloskey, III, STD, Research Fellow of the Faith and Reason Institute in Washington DC

"Narrat[ing] with clarity and insight, Mann draws from a variety of scholarly studies on the Reformation, making the book an excellent introduction to the fall and subsequent rise of the Catholic Church in the British Isles . . . the way in which Mann synthesizes the information into a coherent and flowing analysis gave me a deeper understanding of the sequence and significance of events. . . ."
--Elena Maria Vidal, author of Trianon, Madame Royale, and The Night’s Dark Shade

“Reading Stephanie Mann's marvelous account of the English Reformation was an exhilarating experience! It was particularly inspiring to learn how the English Catholic laity behaved when the winds of arrogance and anarchy blew violently in England. No one can deny that their example is most fitting for us to recall and to emulate as we, Catholic laity of the 21st Century, try to remain standing in our own ‘dictatorship of relativism.’”
--Barbara McGuigan, EWTN host of Open Line and The Good Fight

"When it comes to tellings of the English Reformation, a delicate balance of wit and gravity must be observed if any justice is to be done to this dramatic period in Western history. Stephanie Mann has done just that; in Supremacy and Survival, one gets the facts and figures of the English Reformation, while at the same time getting a hearty dose of the irony and sheer tragedy of English religion in the years following the reign of King Henry VIII."
--Matt Swaim, Producer of the Son Rise Morning Show on EWTN, author of The Eucharist and the Rosary and Prayer in the Digital Age

Supremacy and Survival is "an outstanding book"; Al said he enjoyed it and appreciated my approach and tone, highlighting my "strong academic sense for accuracy [without getting] bogged down in arcane academic debates" and commenting on my "strong sense of Catholic mission but without being triumphalistic or kicking people in the face".
--Al Kresta on Kresta in the Afternoon, from August 4, 2011 Radio Interview

“More than a stimulating history of the Catholic Church in post-reformation England. Mann describes how a modern state imposed its confused, contradictory version of Christianity on an often unwilling and resistant English Catholic people.
--Scott McDermott, author of Charles Carroll, Faithful Revolutionary

“Heroism, betrayal, murder, conniving – this period of history has it all, and Stephanie Mann tells the gripping story with skill and verve.”
--Thomas E. Woods, Jr., Ph.D., New York Times best-selling author of How the Catholic Church Built Civilization

About the Author: Stephanie A. Mann earned Bachelor of Arts and Master of Arts degrees in English Language and Literature from Wichita State University, after attending the School of the Magdalen and Kapaun-Mount Carmel High School. She has taught English and History classes at Wichita State University and Newman University, RCIA Ministry and Spirituality Core courses at the Spiritual Life Center in the Religious Studies Program, and various topics in the RCIA program at her home parish, Blessed Sacrament. Her other interests include travel (especially to Paris, France), reading and participating in reading groups, walking, White West Highland and Norwich Terriers, and most of all her family and friends. She is working on a second book about the English Catholic Martyrs of the Reformation from 1535 to 1681. She is a member of the Kansas Authors Club and the Catholic Writers Guild.