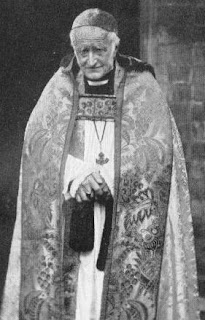 Edward King, Anglican Bishop of Lincoln from 1885, died on March 8, 1910. He was prosecuted for ritual abuses by Edward White Benson (father of Monsignor Robert Hugh Benson) from 1888 through 1890, with his case being heard before the Privy Council on appeal.

His grandfather was Bishop of Rochester and his father an Archdeacon; Edward King attended Oriel College (Newman's own) at Oxford and was one of the leaders of the Anglo-Catholic movement after the end of the Tractarian Movement. He was Regius Professor of Pastoral Theology at Oxford and Canon at Christ Church Cathedral, and founded St. Stephen's House, the Anglo-Catholic theological college at Oxford. King was a close friend of E.B. Pusey at Christ Church. He was known at Oxford and would be known at Lincoln as a holy and devout man, pastoral and caring.

Like Arthur Tooth, whom I've mentioned in a post before, Edward King was a Ritualist--using lighted candles, facing East, mixing water with the wine at Holy Communion, praying the Agnus Dei--but he was not arrested and held in jail. A few parishioners turned him in and he was allowed by the Church Court to continue with some of his practices. A page on the Edward King Centre in Lincoln describes the issue thus:

On one occasion he was caught up in the controversies of his day. Different parties within the Church had come to regard various ceremonial usages as a mark of where the user stood theologically, and in 1887 Bishop King was denounced as celebrating the Liturgy with practices not permitted by the directives in the Book of Common Prayer and elsewhere governing Anglican worship. None of the practices is particularly controversial today. King was tried by a Church Court presided over by the Archbishop of Canterbury. The decision of the Court forbade some of these practices, but permitted others while specifying that they had no theological significance. Thus, lighted candles were to be permitted on the altar, but only when needed for purposes of illumination.

The Church of England honors him on its Kalendar today: O God, our heavenly Father, who didst raise up thy faithful Servant Edward to be a bishop and pastor in thy Church and to feed thy flock: Give abundantly to all pastors the gifts of thy Holy Spirit, that they may minister in thy household as true servants of Christ and stewards of thy divine mysteries; through the same Jesus Christ our Lord, who liveth and reigneth with thee and the same Spirit, one God, for ever and ever.

The March issue of the Our Lady of Walshingham's magazine, The Portal, features an article about Bishop King.
Posted by Stephanie A. Mann at 2:09 AM

Email ThisBlogThis!Share to TwitterShare to FacebookShare to Pinterest
Labels: Anglican Patrimony, Anglo-Catholics, the Church of England, the Oxford Movement