The Annunciation of Our Lord or Lady Day 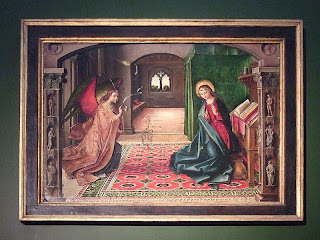 This year, because the Fifth Sunday of Lent (in the Extraordinary Form of the Latin Rite, Passion Sunday) took precedence over the Feast of the Annunciation on March 25, the feast is celebrated today. On his blog last year, Gareth Russell reminded us that this day was celebrated as Lady Day in England and marked the beginning of the new year:

For many centuries, March 25th was often known by people in England as "Lady Day," in honour of Our Lady, the Virgin Mary, rather than by its longer title of "Feast of the Annunciation." Many people do not know that until 1752, the British New Year actually started on Lady Day, rather than January 1st. The reasons for this were twofold - firstly, the conception of Jesus Christ in human form was felt by Christians to mark the beginning of a new era in human history and it was therefore considered appropriate to start the new year on March 25th, out of respect for Christ. Secondly, Lady Day usually falls very close to the Equinox, when the length of day and night is roughly equal, marking the end of the winter and the beginning of spring - hence another reason to celebrate the new year in March, rather than in the dark, depressing and often hunger-filled month of January.
The English reverence for Mary at the beginning of the year certainly reminds me of England as Mary's Dowry.

When Great Britain finally adopted the Gregorian Calendar in 1752, the New Year began on January 1.
Posted by Stephanie A. Mann at 2:03 AM