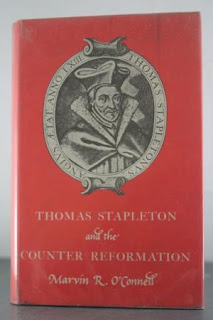 I've finished reading the first of my three books of 2018 this January: Father Marvin O'Connell's Thomas Stapleton and the Counter Reformation.

Contents:
Preface
Abbreviations
1. The Counter Reformation
2. The Man
3. The Work
4. The Quarrel over Justification
5. The Ghost of Pelagius
6. Sola Fides
7. The New Ecclesiastical Polity
8. The Oath of Supremacy
9. The Bishop and the Abbot
10. The Counterblast
Bibliographical Note
Index

Although unlike St. Thomas More--whom he admired and about whom he wrote in a triple biography of his patrons (St. Thomas the Apostle, St. Thomas Aquinas, and More)--Thomas Stapleton was an trained and ordained theologian and priest, in a way he is a successor to More. He wrote extensive and exhaustive controversial works, works that are still as little known as More's were in the last century. O'Connell notes that there are only two copies of some of Stapleton's works, which comprise around five million words in Latin and one million in English. The Catholic Encyclopedia lists the following titles:

Like St. Thomas More, Stapleton uses many rhetorical devices to argue with his Anglican and Protestant opponents, including incredulous questions and accusations of inconsistency and illogical reasoning. O'Connell doesn't make this suggestion in his study of Stapleton but I thought of it when reading some of the excerpts from his works, especially when answering Bishop Horne or Jewell.

O'Connell introduces his study with a chapter discussing the proper dating of the Counter Reformation (in his bibliographical note he mentions that the Counter Reformation has "yet to find its historian", since this was published before he had written his own study of the era): he focuses on the abdication of Charles V and the succession of Philip II to the throne of Spain in 1555. Although Philip II always looked after Spain's concerns first, he did much to assist the Jesuits, including the English exiles, and other defenders of the Catholic faith in the Church's efforts to respond to the Protestant Reformation. O'Connell also hails the election of the first of the Counter Reformation popes, Paul IV in 1555 as support for his dating of the era: "The day of the simoniacal pope, the militarist pope, and the dilettante pope had ended." (p. 15) He continues with sketches of succeeding popes, concluding with Clement VIII (1592-1605).

Then O'Connell provides a chapter on Stapleton's life, which is summarized thusly as in the Catholic Encyclopedia:

Controversialist, born at Henfield, Sussex, July, 1535; died at Louvain, 12 Oct., 1598. He was the son of William Stapleton, one of the Stapletons of Carlton, Yorkshire. He was educated at the Free School, Canterbury, at Winchester, and at New College, Oxford, where he became a fellow, 18 Jan., 1553. On Elizabeth's accession he left England rather than conform to the new religion, going first to Louvain, and afterwards to Paris, to study theology. In 1563, being in England, he was summoned by the Anglican bishop Barlow to repudiate the pope's authority, but refused and was deprived of the prebend of Woodhorne in Chichester Cathedral, conferred on him in 1558. He then retired to Louvain with his father and other relatives. In 1568 he joined Allen at Douai and took a great part in founding the English college there, both by lecturing and by devoting to its support his salary as lecturer in theology at Anchin College.

His talents were so remarkable that he was soon appointed public professor of divinity, and canon of St. Amatus; and together with Allen he completed the degree of D.D. on 10 July, 1571. In 1584 he resigned these preferments to enter the Society of Jesus, but did not complete his novitiate, and returned to Douai. Philip II appointed him professor of Scripture at Louvain in 1590, to which office a canonry in St. Peter's Church was annexed; and soon after he was made dean of Hilverenbeeck in the Diocese of Boisle-Duc. The emoluments of these offices were all spent in relieving necessitous English Catholics. Meanwhile his fame as a theologian had spread to Rome and Pope Clement VIII thought so much of his theological writings that he caused them to be read aloud at his table. Twice he invited Stapleton to Rome in vain, but his offer to make him prothonotary Apostolic in January, 1597, was accepted. It was generally believed that he would be created cardinal, a suggestion which was disapproved of by Father Agazzari, S. J., rector of the English College, and obstacles were put in the way of his journey to Rome (Eley, "Certaine Briefe Notes", p. 254). He accordingly remained at Louvain till his death in the following year. He left his books and manuscripts (now lost) to the English College at Douai. An original painting of Stapleton is preserved at Douai Abbey, Woolhampton, England.

Except for that 1563 visit to England, Stapleton lived as an exile and tried to help restore Catholicism in England, not by being a missionary priest, but by educating seminarians and writing apologetic and polemic works. He had some conflict with Father Robert Persons when that Jesuit leader thought that Stapleton was siding with Jesuit opponents, but Stapleton's time was mostly taken up with study, teaching, and writing--and charity to Englishmen in exile. Not a very exciting life.

After providing an overview of Protestant and Catholic views of justification, O'Connell highlights the crucial efforts of the Council of Trent's 1547 definition of the traditional Christian teaching about justification, providing Catholic theologians for a ground for discussion. Stapleton thought the doctrine on justification was the crucial issue of the Protestant Reformation and the chief error of the heretic beliefs of Protestants, influencing their attacks on the Sacraments, good works, prayer, the saints, etc. Stapleton did not want to waste time defending Catholics from charges of abuse or corruption, because he thought the central issue to discuss was justification. He wrote against Lutheran, Anglican, and Calvinist teachings on justification, defending the Catholic view.

O'Connell also highlights Stapleton's defense of John Feckenham, the last Abbot of Westminster, in his controversy with Robert Horne, the Anglican Bishop of Winchester, over the Oath of Supremacy, which Feckenham refused to take under Elizabeth I. O'Connell provides trenchant biographical sketches of Feckenham and Horne and then addresses Stapleton's arguments with Horne over the queen's supremacy and control of the Church of England. He contended that Horne and other Protestants who served as Anglican bishops had betrayed their own beliefs about authority in the Church: they said it was the Holy Bible, but they had sworn loyalty to Elizabeth, who could dispose bishops, decide the order of worship, and demand certain vestments be worn. Horne tried to argue that there was a clear division of civil and ecclesiastical control, but Stapleton mocked those attempts in view of what Elizabeth had already done in having laymen in Parliament define the doctrine of the Church of England, etc.

O'Connell ends his study of Thomas Stapleton's life and works and his efforts to defend Catholic teaching on justification and authority with that controversy. In a way, his bibliographical note provides the summary of Stapleton's efforts and how little we know of them today. Like Allen and Persons, Stapleton was probably too sanguine about the restoration of Catholicism in England, hoping that Spanish action could win the day, backed up by excellent apologetics and clear teaching of the truth.
Posted by Stephanie A. Mann at 12:30 AM