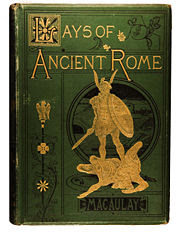 On the anniversary of Thomas Babington Macaulay's birthday on October 25 in 1800, it seems appropriate to quote his interesting words on the Catholic Church from a review of Ranke's History of the Popes:

There is not, and there never was on this earth, a work of human policy so well deserving of examination as the Roman Catholic Church. The history of that Church joins together the two great ages of human civilisation. No other institution is left standing which carries the mind back to the times when the smoke of sacrifice rose from the Pantheon, and when camelopards and tigers bounded in the Flavian amphitheatre. The proudest royal houses are but of yesterday, when compared with the line of the Supreme Pontiffs. That line we trace back in an unbroken series, from the Pope who crowned Napoleon in the nineteenth century to the Pope who crowned Pepin in the eighth; and far beyond the time of Pepin the august dynasty extends, till it is lost in the twilight of fable. The republic of Venice came next in antiquity. But the republic of Venice was modern when compared with the Papacy; and the republic of Venice is gone, and the Papacy remains. The Papacy remains, not in decay, not a mere antique, but full of life and youthful vigour. The Catholic Church is still sending forth to the farthest ends of the world missionaries as zealous as those who landed in Kent with Augustin, and still confronting hostile kings with the same spirit with which she confronted Attila. The number of her children is greater than in any former age. Her acquisitions in the New World have more than compensated for what she has lost in the Old. Her spiritual ascendency extends over the vast countries which lie between the plains of the Missouri and Cape Horn, countries which a century hence, may not improbably contain a population as large as that which now inhabits Europe. The members of her communion are certainly not fewer than a hundred and fifty millions; and it will be difficult to show that all other Christian sects united amount to a hundred and twenty millions. Nor do we see any sign which indicates that the term of her long dominion is approaching. She saw the commencement of all the governments and of all the ecclesiastical establishments that now exist in the world; and we feel no assurance that she is not destined to see the end of them all. She was great and respected before the Saxon had set foot on Britain, before the Frank had passed the Rhine, when Grecian eloquence still flourished at Antioch, when idols were still worshipped in the temple of Mecca. And she may still exist in undiminished vigour when some traveller from New Zealand shall, in the midst of a vast solitude, take his stand on a broken arch of London Bridge to sketch the ruins of St. Paul's.

While Macaulay was definitely not a Catholic, he also commented approvingly on the Church's method of dealing with dissent. G.K. Chesterton analyzes Macaulay here:

Macaulay makes the foundation of the Victorian age in all its very English and unique elements: its praise of Puritan politics and abandonment of Puritan theology; its belief in a cautious but perpetual patching up of the Constitution; its admiration for industrial wealth. But above all he typifies the two things that really make the Victorian Age itself, the cheapness and narrowness of its conscious formulæ; the richness and humanity of its unconscious tradition. There were two Macaulays, a rational Macaulay who was generally wrong, and a romantic Macaulay who was almost invariably right. All that was small in him derives from the dull parliamentarism of men like Sir James Mackintosh; but all that was great in him has much more kinship with the festive antiquarianism of Sir Walter Scott.

He is the Whig historian of all Whig historians in England: certain of his nation's progress to reform and empire. Macaulay's Lays of Ancient Rome and his History of England are almost forgotten now, but at one time were standards of their genres. Sic transit gloria mundi.
Posted by Stephanie A. Mann at 2:14 AM