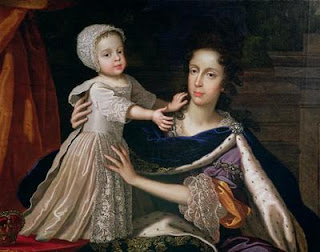 Yesterday, the BBC announced that the rules of succession for the UK's monarchy have been changed:

Sons and daughters of any future UK monarch will have equal right to the throne, after Commonwealth leaders agreed to change succession laws.

The leaders of the 16 Commonwealth countries where the Queen is head of state unanimously approved the changes at a summit in Perth, Australia.

It means a first-born daughter of the Duke and Duchess of Cambridge would take precedence over younger brothers.

The ban on the monarch being married to a Roman Catholic was also lifted. . . .

On scrapping the ban on future monarchs marrying Roman Catholics, Mr Cameron said: "Let me be clear, the monarch must be in communion with the Church of England because he or she is the head of that Church. But it is simply wrong they should be denied the chance to marry a Catholic if they wish to do so. After all, they are already quite free to marry someone of any other faith."

Scotland's First Minister Alex Salmond welcomed the lifting of the ban but said it was "deeply disappointing" that Roman Catholics were still unable to ascend to the throne.

"It surely would have been possible to find a mechanism which would have protected the status of the Church of England without keeping in place an unjustifiable barrier on the grounds of religion in terms of the monarchy," he said.

"It is a missed opportunity not to ensure equality of all faiths when it comes to the issue of who can be head of state."

These rules are not applied retroactively, so Princess Anne still follows her younger brothers in the line of succession and any heir who married a Catholic is still out (unless the spouse has already become an Anglican). Earlier this year, the Church of England had blocked the change that now allows an heir to the throne to marry a Catholic:

Church leaders expressed concern that if a future heir to the throne married a Roman Catholic, their children would be required by canon law to be brought up in that faith.

This would result in the constitutionally problematic situation whereby the Supreme Governor of the Church of England was a Roman Catholic, and so ultimately answerable to a separate sovereign leader, the Pope, and the Vatican.

It's not clear what changed that cleared the way for this announcement. Perhaps someday Mary Beatrice of Modena will not be the "Last Catholic Queen (consort) of England"!
Posted by Stephanie A. Mann at 2:14 AM