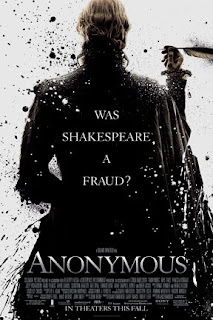 There is a new Elizabethan era movie out that boasts a very interactive and active website.

Allan Massie writes in The Telegraph:

What do Shakespeare, Keats and Dickens have in common, apart from being great writers, masters of the English language? The answer is pretty obvious. None of them went to university; to some extent all three were self-educated. Ben Jonson said that Shakespeare had “small Latin and less Greek”, and likewise I don’t think Dickens and Keats, despite the latter’s "Ode to a Grecian Urn", had much of either.

What’s the difference between them? Nobody, I think, has ever suggested Keats didn’t write that ode and others, or that Dickens wasn’t the author of Bleak House and Great Expectations. But Shakespeare – ah Shakespeare – there’s a whole industry devoted to trying to prove that somebody else wrote his plays. So here we go again, with a movie from Roland Emmerich, entitled Anonymous, which hands the authorship to Edward de Vere, 17th Earl of Oxford.

James Shapiro writes in a New York Times editorial: "In dramatizing this conspiracy, Mr. Emmerich has made a film for our time, in which claims based on conviction are as valid as those based on hard evidence. Indeed, Mr. Emmerich has treated fact-based arguments and the authorities who make them with suspicion." He also goes on to lament the fact that Shakespeare's plays become nothing more than political propaganda, that they are reduced to tools for traitors and clues for conspiracy theorists. Evidently, the whole point of Oxford's ruse of having the actor Shakespeare take credit for his work is that he needs protection for his support of Essex!

The director of the movie, Roland Emmerich, does believe in the conspiracy Anonymous proposes and responds to a question about Shakespeare scholars' reactions to his film: "They will say it's all crap and I will defend myself as eloquently as I can," he laughs. "I'm no professor, but I cannot believe that somebody who had nearly no education could write like this."

So on the one hand, a playwright with "nearly no education" could not have written the plays, but on the other hand, a director with "nearly no education" in the Elizabeth era can make judgments about the authorship of Shakespeare's plays! If Emmerich can be an autodidact then so could Shakespeare. That's why I really like Shapiro's phrase describing Emmerich's presentation of Looney's theory: "claims based on conviction are as valid as those based on hard evidence". The Shakepeare Birthplace Trust has developed its own website to counter these claims.

I've scanned some reviews on-line and the movie does not seemed to be that well-received, except for the production qualities of scenery and costume. Elizabeth I, her chief counselors the Cecils, Ben Jonson, Oxford and Essex--everyone sounds crooked and unreal. Elizabeth is no virgin and everything is a plot: "All Art is Political."

I am still curious about how the film depicts the religious conflict in Elizabethan England; if and how Oxford and Jonson's flirtations with Catholicism are dramatized. I'll be interested to read Steven D. Greydanus' review of the film, because he will be attuned to that aspect.
Posted by Stephanie A. Mann at 2:16 AM