Grandfather, Father, and Son: the Earls of Southampton 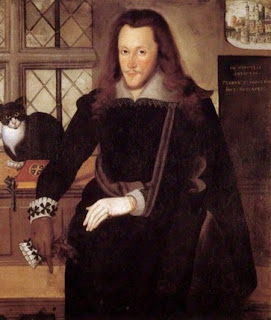 According to the Dictionary of National Biography, his grandfather also had some tremendous character flaws--he could even be compared to Richard-but-for-Wales-Rich(!):

It is difficult to trace in Southampton's career any motive beyond that of self-aggrandisement. Trained in the Machiavellian school of Cromwell, he was without the definite aims and resolute will that to some extent redeemed his master's lack of principle. He won and retained Henry VIII's favour by his readiness in lending his abilities to the king's most nefarious designs, thereby inspiring an almost universal distrust. The theological conservatism with which he has always been credited was tempered by a strict regard to his own interests. Under Cromwell he was an enemy to bishops and a patron of reformers like Richard Taverner and Robert Talbot; he was thanked by another protestant for bringing him 'out of the blind darkness of our old religion into the light of learning,' and thought the 'Bishops' Book' of 1537 too reactionary. It was not until Cromwell had fallen and Henry had adopted a more conservative policy that Wriothesley returned to Catholicism. Even then he sacrificed nothing in its cause, and few profited more extensively by the spoliation of the monasteries. He racked Anne Askew, it is true, but he also assisted to ruin the Howards, who alone might have stayed the Reformation after Henry's death. As lord chancellor he made no mark except by his severity towards the victims of Henry VIII, and his legal training seems to have consisted solely in his admission to Gray's Inn. Leland, however, wrote a eulogy of him, and he is credited with at least two irreproachable sentiments, namely, that he who sold justice sold the king; and that while force awed, justice governed the world.

Thomas's son, Henry's father, also named Henry, 2nd Earl Southampton , also spent some time in the Tower, because he was implicated in Thomas Howard, the Duke of Norfolk's plan to marry Mary, Queen of Scots and because of his Catholic sympathies (he was accused of harboring St. Edmund Campion, for example). He had married the daughter of Anthony Browne, lst Viscount Montagu, a prominent Catholic noble and Henry's daughter married Thomas Arundell, lst Baron Arundell of Wardour, another Catholic magnate noble.

Today's birthday boy was a great patron of William Shakespeare:

But the chief of Southampton's poetic clients was Shakespeare. In April 1593 Shakespeare dedicated to Southampton his poem 'Venus and Adonis;' there Shakespeare's language merely suggests the ordinary relations subsisting between a Mæcenas and a poetic aspirant to his favourable notice. In May 1594 Shakespeare again greeted Southampton as his patron, dedicating to him his second narrative poem 'Lucrece.' In his second dedicatory epistle to the earl Shakespeare used the language of devoted friendship; although such language was common at the time in communication between patrons and poets, Shakespeare's employment of it is emphatic enough to suggest that his intimacy with Southampton had become very close since he dedicated 'Venus and Adonis' to him in more formal language a year before.

Kristen Deiter analyses the symbolism of the portrait above in her book/dissertation, The Tower of London in English Renaissance Drama, contending that Wriothesley's clothing, his bare hand in the sling, the cat and the book on the windowsill, and the print of the Tower in the upper right all have meaning. The portrait was painted after Elizabeth I was dead and the Earl was out of prison and at James I's Court.
Posted by Stephanie A. Mann at 2:08 AM