St. Philip Howard: Affliction in This Life; Glory with Jesus in the Next 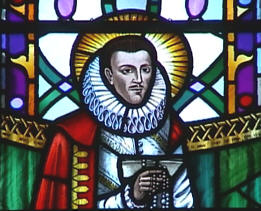 St. Philip Howard died in the Tower of London on October 19, 1595. The Roman Catholic Diocese of Arundell and Brighton features this biography:

St Philip, born 28 June 1557, was thirteenth Earl of Arundel. His father Thomas, IV Duke of Norfolk, was beheaded by Queen Elizabeth in 1572 for involvement in the affair of Mary, Queen of Scots. Philip Howard, baptised by the Archbishop of York in the Chapel of Whitehall Palace, had Philip of Spain as one of his godfathers.

Philip married Anne, daughter of Lord Dacre of Gilsland, when he was fourteen. He graduated at St John's College, Cambridge in 1574 and was about eighteen when he attended Queen Elizabeth's Court. Handsome, high-born, quick-witted and articulate, he neglected his wife and God but the turning point came in 1581 when he was present at a disputation in the Tower of London between a group of Catholic prisoners, Fr Edmund Campion, Jesuit, Fr Ralph Sherwin, Priests and others. These humble suffering Confessors awakened Philip's soul and he returned to Arundel to think about reconciliation with the Catholic Church, which he knew meant death.

His trial and imprisonment were totally at Queen Elizabeth's pleasure--the only treason he had committed was being reconciled to the Catholic Church.

Thereon began his long term of imprisonment, never knowing from day to day which would be his last. Each day he spent several hours in prayer and meditation; he was noted for his patience in suffering and courtesy to unkind keepers. Weakened by malnutrition and not without a suspicion of having been poisoned, he died on 19 October 1595. He was 39 years old and had spent the last eleven years of his life in the Tower of London.

One of the most horrible aspects of his long imprisonment and then his imminent death is that when he asked permission to see the son with whom his wife was pregnant when St. Philip was imprisoned, Elizabeth I placed a condition on it. He would have to conform to the Church of England and deny his faith. "Good Queen Bess" indeed. After his death he was buried in St. Peter ad Vincula but was entombed at the cathedral after his canonization and his shrine is described here.

I will be on the Son Rise Morning Show today at 7:45 a.m. Eastern/6:45 a.m. Central to discuss this great saint with Brian Patrick.
Posted by Stephanie A. Mann at 2:14 AM