G.K. Chesterton and Alfred the Great 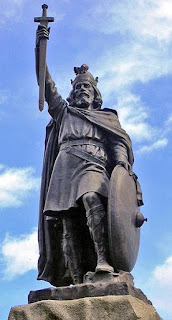 Alfred the Great, the King of Wessex, died on October 26, 899. He defended the Anglo-Saxon kingdoms of southern England against the Vikings, becoming the only English monarch still to be accorded the epithet "the Great". Alfred was a learned man who encouraged education and improved his kingdom's legal system and military structure. The Anglican Communion venerates him as a Christian hero, with a feast day of 26 October.

G.K. Chesterton wrote "The Ballad of the White Horse" to commemorate King Alfred's defeat of the Danes at the battle of Ethandun under the guidance of the Blessed Virgin Mary. It is an epic poem of 2,684 words in VIII books. Dale Ahlquist at the American Chesterton Society analyses the poem here:

Chesterton may have considered The Ballad of the White Horse his greatest literary accomplishment. I have two reasons for saying that. First of all, it is a masterpiece. But it was the only one of his works that he felt worthy enough to dedicate to his wife. The Ballad of the White Horse is one of the last great epic poems in the English language. It deserves a high place in literature. It is should be studied in depth and discussed at length and appreciated far and wide. But as is the case with most of Chesterton’s writings, too few of us have figured this out.The Ballad is the story of the English King Alfred, who fought the Danes in the year 878. But it is also the story of Christianity battling against the destructive forces of nihilism and heathenism, which is the battle we are still fighting.
Posted by Stephanie A. Mann at 2:08 AM