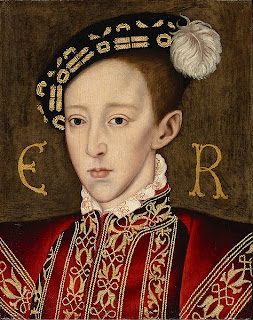 Edward, the Duke of Cornwall, Henry VIII's longed-for son and heir, was born on October 12, 1537 at Greenwich. His mother, Jane Seymour would unfortunately not survive the childbed. When Henry VIII died in 1547, Edward VI was only nine years old and he did not live to reach his majority. He was crowned on February 20, 1547 and died on July 6, 1553. His father left provisions for a council of noblemen as regents, but two men dominated his reign: Edward Seymour, the Duke of Somerset (1547-49) and John Dudley, the Duke of Northumberland (1550-1553).

Regarding himself as a second Josiah, the young king of Judah who restored true worship and the scriptures in the Old Testament, young Edward VI approved of the religious changes that Thomas Cranmer, the Archbishop of Canterbury was making. Cranmer composed The Book of Common Prayer and the Thirty-Nine/Forty-Two Articles of the Church of England, while Calvinist reformers from the Continent came to England, (Peter Martyr Vermigli and John a Lasco/Jan Laski) influenced his religious theories. Parliament then imposed these new forms of worship and prayer on the English people, and the Prayer Book Rebellion was the result.

As Edward's latest biographer, Chris Skidmore notes: "Edward's reign became a time of intrigue, deceit, plotting and treason, nearly plunging the country into civil war." At the end of his life, Edward tried to remove his half-sister Mary from the succession after his death, once again almost plunging the country into civil war. The people supported her, however, and his attempt failed.
Posted by Stephanie A. Mann at 2:06 AM