St. Paul's in The City Closed for Christmas? 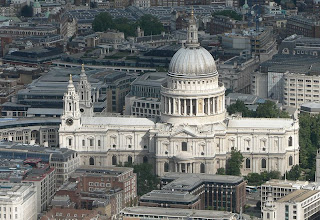 Now this is very odd: the Cathedral of St. Paul's in the City of London is closed because the Occupy Wall Street protesters have mistaken its grounds for Wall Street! The protests even interfered with a private wedding:

London's landmark St Paul's Cathedral remained closed on Saturday because of hazards posed by hundreds of protesters encamped in front of it in a demonstration inspired by the Occupy Wall Street movement.
Dean Graeme Knowles, a senior cleric, wrote an open letter to protesters asking them to leave the square peacefully, which they have occupied since last Saturday after initially targeting the nearby London Stock Exchange.
"We have done this with a very heavy heart, but it is simply not possible to fulfil our day to day obligations to worshippers, visitors and pilgrims in current circumstances," Knowles said in a statement.
In The Catholic Herald, William Oddie asks an ever odder question: if the cathedral cannot open until after Christmas (if the protests go on so long), will it even matter? even to Anglicans?
The real question is, and I really don’t mean to be gratuitously discourteous or dismissive, what will it actually matter if St Paul’s is closed for such a long time? And (to pre-empt those inclined on these occasions to fall into their usual rut, accusing me of the usual ex-Anglican convert’s Newmanian dismissiveness of Anglican institutions) let me say that I would have asked exactly the same question had I still been an Anglican clergyman. Another way of asking the same question would be to say “what is any Anglican Cathedral actually for?” – though when it comes to St Paul’s, as we shall see, we have to ask the question with particular sharpness.
He goes on to direct his readers to the Cathedral website, where all the statements about the closure of St. Paul's come from the Dean of the Cathedral and one of its Canons.
On our trip to London several years ago, St. Paul's was the second great disappointment--the first time we went it was closed to visitors for an ordination; the second time we went, we really couldn't see anything because of construction inside! Many of the events that would be held in the Cathedral will have to be moved, of course. The shop and restaurant in the crypt will be closed and tourists, at least, will be very disappointed. Poor Christopher Wren!--no one may look about and see his monument (until further notice, at least).
Posted by Stephanie A. Mann at 2:20 AM