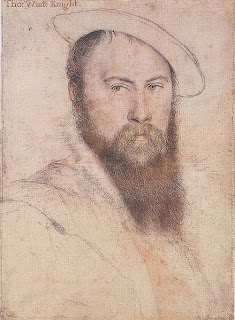 The poet Thomas Wyatt died on October 11, 1542. As my various posts on the Howard and Wriothesly families have demonstrated, it was dangerous to be a courtier in the Tudor Court. Fortunes could change rapidly, and these families certainly needed the consolations of Boethius!

Thomas Wyatt the Elder and Henry Howard, the Earl of Surrey were the great early poets of the English Renaissance, introducing the sonnet form to English poesy. In addition to their interest in poetry, they both dabbled in gaining influence at Court and sometimes endured imprisonment because of factions and conflicts between parties and families.
Wyatt witnessed the executions of Anne Boleyn and the men accused of adultery with her in 1536 while he was in the Tower of London accused of the same crime. He was, however, released later that year. Wyatt served as a diplomat and endured quite a marital struggle since his wife Elizabeth Brooke was not faithful. When Catherine Howard was executed in February 1542, there were rumors that Henry VIII was interested in Wyatt's wife! Wyatt continued to fall in and out of favor until his death in Dorset. He is buried in Sherborne Abbey.
Perhaps his most famous sonnet is the one assumed to be about his attraction to Anne Boleyn, thwarted by Henry VIII:
WHOSO list to hunt? I know where is an hind!
But as for me, alas! I may no more,
The vain travail hath wearied me so sore ;
I am of them that furthest come behind.
Yet may I by no means my wearied mind
Draw from the deer ; but as she fleeth afore
Fainting I follow ; I leave off therefore,
Since in a net I seek to hold the wind.
Who list her hunt, I put him out of doubt
As well as I, may spend his time in vain!
And graven with diamonds in letters plain,
There is written her fair neck round about ;
'Noli me tangere ; for Cæsar's I am,
And wild for to hold, though I seem tame.'
Also well-known is the poem he wrote after May 19, 1536, having witnessed the executions of Anne Boleyn and her accomplices in adultery.
His son Thomas Wyatt the Younger, supported the Duke of Northumberland's attempt to place Lady Jane Dudley on the throne and then led the eponymous rebellion against Queen Mary I in 1554 to prevent the queen's marriage to Philip of Spain. Like his father, he had also been in prison on various occasions for crimes at Court and in London.
Posted by Stephanie A. Mann at 2:39 AM