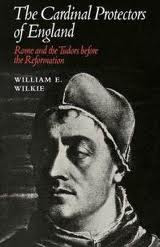 Continuing this review of relations between England and the Papacy, let's look at this very focused book, The Cardinal Protectors of England: Rome and the Tudors Before the Reformation by William E. Wilkie, published by Cambridge University Press in 1974.

Preface
Introduction
Chapter 1. The beginnings of the cardinal protectorship of England, 1492-1514
--The cardinals in the Roman Curia
--Henry VII and the Papacy
--Francesco Todeshini Piccolomini
--The role of Adriano Catellesi
--The search for a protector: Galeotto della Rovere and Francesco Alidosi
--The career of Christopher Bainbridge

Chapter 4. The emergence of Lorenzo Campeggio, 1518-24
--Campeggio's first legations in England
--The alliance of England and the Papacy with Charles V
--Pope Adrian VI: de' Medici in eclipse
--De' Medici in triumph
--Campeggio, protector at last

Chapter 6. The end of an arrangement, 1528-34
--The divorce: Campeggio under pressure from pope, England and emperor
--Campeggio in England as legate and judge
--The protector of England in the company of Charles V
--The widening rift between England and the papacy

First, a word about structure: as you might notice, Wilkie covers the same chronology in chapter 1 and 2 and chapter 5 overlaps with chapters 3 and 4. The first chapter or chapters contain the overview of the events, while the next chapters focus on particular themes and efforts during the particular protectorates. This does create some repetition. Chapters 6 and 7 get us into the King's Great Matter of his marriage to Katherine of Aragon, considering the cardinal protector's involvement.

This is really history of diplomacy, as the cardinal protector's role was to present the positions of Henry VII and Henry VIII to the Roman Curia and to the Pope. The Cardinal Protector for England (and also of Venice, or France, or the Holy Roman Emperor, etc) also smoothed the path of the monarch's nominees for different bishoprics throughout England and, during the reign of Henry VIII, Thomas Wolsey's role as papal legate. Henry VII, who succeeded as King of England when he defeated Richard III on the battlefield, needed the approval and support of the papacy for dynastic legitimacy.

Two of the Cardinals Protector became popes (Piccolomini reigned as Pius III; de'Medici as Clement VII. Henry VIII expected that his former Cardinal Protector would grant him his wishes regarding his marriage and counted on his current Protector, Lorenzo Campeggio, to support his cause. In fact, the relationship between England and the Papacy had been running smoothly during the Tudor monarchy--that is, until Henry VIII wanted the Pope and his Protector to declare his marriage to Katherine of Aragon null and void. Diplomatic history is not really my cup of tea, but this is a model of research and scholarship and is essential for background to the ecclesiastical crisis of Henry VIII's Great Matter.
Posted by Stephanie A. Mann at 2:16 AM