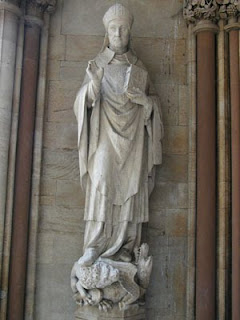 On October 14, 1504, a future martyr and saint became Bishop of Rochester. Fisher was attentive to his duties as bishop and resident in his diocese, never seeking additional perferment or holdings. His reputation for personal holiness is such that Winston Churchill highlighted him among Henry VIII's victims as "a saintly bishop" in A History of the English-Speaking Peoples.


In 1504 he also became Chancellor of the University of Cambridge. He had been collaborating with Henry VII's mother, Margaret Beaufort, to establish colleges, professorships of divinity, and scholarships there to educate priests. He became renowned as a preacher--delivering the funeral sermons for both Henry VII and Margaret Beaufort.
This site offers a compendium of works by and about St. John Fisher, including the image above, a statue of the saint outside the chapel at St. John's College, Cambridge. The St. John Fisher Catholic student center is in the midst of its Michaelmas term with daily Mass and several activities. Our Lady and the English Martyrs Church in Cambridge features a "Fisher Aisle" depicting scenes from the life of that great saint and martyr. Cambridge is the place to go to see St. John Fisher!
Posted by Stephanie A. Mann at 2:14 AM