Thomas Traherne and His Centuries 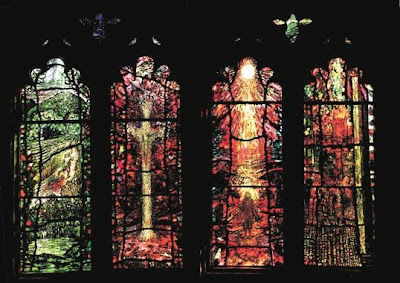 
Wonder
How like an angel came I down!
How bright are all things here!
When first among his works I did appear
O how their glory me did crown!
The world resembled his eternity,
In which my soul did walk;
And ev'ry thing that I did see
Did with me talk.
The skies in their magnificence,
The lively, lovely air;
Oh how divine, how soft, how sweet, how fair!
The stars did entertain my sense,
And all the works of God, so bright and pure,
So rich and great did seem,
As if they ever must endure
In my esteem.
A native health and innocence
Within my bones did grow,
And while my God did all his glories show,
I felt a vigour in my sense
That was all spirit. I within did flow
With seas of life, like wine;
I nothing in the world did know
But 'twas divine.
Harsh ragged objects were conceal'd,
Oppressions tears and cries,
Sins, griefs, complaints, dissensions, weeping eyes
Were hid, and only things reveal'd
Which heav'nly spirits, and the angels prize.
The state of innocence
And bliss, not trades and poverties,
Did fill my sense.
The streets were pav'd with golden stones,
The boys and girls were mine,
Oh how did all their lovely faces shine!
The sons of men were holy ones,
In joy and beauty they appear'd to me,
And every thing which here I found,
While like an angel I did see,
Adorn'd the ground.
Rich diamond and pearl and gold
In ev'ry place was seen;
Rare splendours, yellow, blue, red, white and green,
Mine eyes did everywhere behold.
Great wonders cloth'd with glory did appear,
Amazement was my bliss,
That and my wealth was ev'ry where:
No joy to this!
Curs'd and devis'd proprieties,
With envy, avarice
And fraud, those fiends that spoil even Paradise,
Flew from the splendour of mine eyes,
And so did hedges, ditches, limits, bounds,
I dream'd not aught of those,
But wander'd over all men's grounds,
And found repose.
Proprieties themselves were mine,
And hedges ornaments;
Walls, boxes, coffers, and their rich contents
Did not divide my joys, but all combine.
Clothes, ribbons, jewels, laces, I esteem'd
My joys by others worn:
For me they all to wear them seem'd
When I was born.
The Thomas Traherne Association promotes his work here:

Thomas Traherne was born within the walls of Hereford City in about 1637, close to All Saints Church, where he was probably baptised. He was about 5 when the Civil War came to the city. He may have been at Hereford Cathedral School in 1649 when King Charles I was beheaded. In later life he wrote of the King as martyr.

In 1653, in the midst of the Commonwealth, he went to Brasenose College, Oxford, one of the most puritan colleges, gaining his BA in 1656. But he could find no one who would teach him felicity – happiness, which he wrote of as ‘the mistress of all other sciences’. And so he returned to Hereford. In 1657 he was appointed Rector of St Mary’s Church Credenhill, 5 miles NW, supported by Presbyterian clergy who were preachers at Hereford Cathedral. With the Restoration, and the return of King Charles II in 1660, he sought ordination. With no Bishop of Hereford, he journeyed to Launton near Bicester to be ordained by the exiled Bishop of Oxford, on 20th October 1660.

At this time he was finishing one of his first works, ‘Select Meditations’ containing thinking which had developed through England’s darkest days. In it he sought to ‘teach Immortal Souls the way to Heaven’. This underestimated manuscript did not come to light until it was found in Birmingham in 1964. It was finally published in 1997, and has remained in print.

He continued writing poetry and prose throughout 17 years as parish priest, but it was not until 1673 that he had a book published – Roman Forgeries. In 1674 he finally left Credenhill for London to become domestic chaplain to Sir Orlando Bridgeman (former Lord Keeper of the Great Seal) at Teddington. There he prepared his last work for publication – ‘Christian Ethicks – the way to Blessedness’. In the Autumn he died, and was buried on 10th October 1674 in St Mary’s Church, Teddington. Christian Ethicks was published within months. , but neither of the two printed books attracted any attention, and he was forgotten for over 200 years.

Much of his hand written poetry was rediscovered in the nick of time: on a street bookstall in London in the winter of 1896-7, together with a work which many have thought his finest – his prose ‘Centuries of Meditations’ published in 1908 (poetry, 1903). The writer Edward Thomas wrote of Traherne, in his book ‘Wales’ (1905), as “that fine poet of the 17th Century”. He quoted his poem about childhood, ‘Eden’ :
‘A learned and a happy ignorance / Divided me / from all the vanity / …sloth, care, pain and sorrow that advance the madness and the misery of men.

Major discoveries of other unknown handwritten works have followed. ‘The Commentaries of Heaven’, an encyclopaedia of happiness, was rescued from a burning rubbish tip near Wigan in about 1967 by a man looking for spare parts for his car. And in 1997 five more works were found in Lambeth Palace Library, including his major work ‘The Kingdom of God’. These have all now been published.

The image above is of the Traherne windows in the Audley Chapel at Hereford Cathedral.
Posted by Stephanie A. Mann at 2:12 AM