England and the Papacy, Part One: Book Review 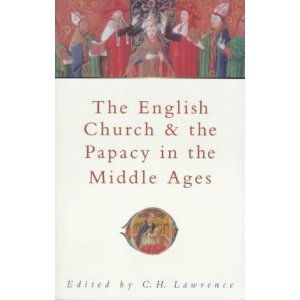 It is commonly asserted that the English never got along with the papacy--that there was a long history of conflict between the English state and the Popes. This fact is often used to explain the English Reformation as a natural development of history, occasioned finally and decisively by Henry VIII's marital crisis. These two books, however, The English Church & the Papacy in the Middle Ages, edited by C.H. Lawrence and The Cardinal Protectors of England: Rome and the Tudors before the Reformation by William E. Wilkie, may cast some doubt on that truism.

The first book was issued in 1965 and revised in 1999 by Sutton Publishing. Each chapter includes a Select Bibliography. The book does not offer biographies of the contributors. Contents:

The first chapter is refreshingly free of the Thomas Cahill-type conflict between Celtic and Roman Catholicism in which the Roman Catholic Church is rigid and evil and the Celtic Church all humane and wonderful. Instead, Kathleen Hughes surveys the interaction between the Papacy and Celtic bishops and culture without that polemic edge, while still covering the issues about the of Easter and discipline throughout the Church.

In the second, new chapter for the 1999 edition, Veronica Ortenberg describes the very close relationship between the Catholic Church in England  and the Papacy during the Anglo-Saxon era, including of course, Pope St. Gregory the Great sending St. Augustine of Canterbury to Kent. She demonstrates how devoted Catholics in England at that time were to the Popes as the successors of St. Peter, how regularly bishops and laity travelled to Rome on pilgrimage, and how much correspondence, usually requesting and offering papal guidance, was exchanged.

As expected from the title, the third chapter covers, although with the assumption of the reader's prior knowledge of the outline of events, the conflicts between Henry II and St. Thomas a Becket, and John and Innocent III, noting that in the latter case, at least, once the crisis was resolved John gained a great deal of support from the pope, especially after making England a vassal of Innocent III.

The editor, in addition to providing the introduction, offers the chapter on the 13th century. With his background in the history of the monastic and mendicant movements, you'd expect him to include them in this chapter, and he matches your expectations.

W.A. Pantin, of course, is the author of The English Church in the Fourteenth Century, which is an essential book for knowledge of the Church in late medieval England, so his chapter is an excellent summary of the reform efforts in that century.

With the last chapter, we come into the period of Avignon Papacy, the Conciliar Movement, and the Tudor Dynasty, which sets up the transition to the William Wilkie book about the Cardinal Protectors, which I'll discuss tomorrow. I found  The English Church & the Papacy in the Middle Ages to have all the virtues and faults of a collection of essays by different authors: different writing styles, variations in points of view, etc., but all with the same high level of scholarship.
Posted by Stephanie A. Mann at 2:09 AM