The Shrine that Survived: St. Edward the Confessor and Westminster Abbey 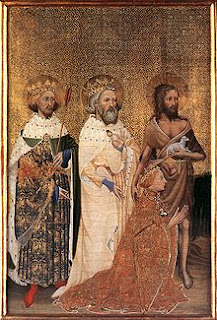 The shrine of St. Edward the Confessor (the saint in the center of the Wilton diptych at left) in Westminster Abbey survived iconoclasm and Civil War (barely) according to the Abbey's website:

Edward the Confessor, as he was known, had not been a particularly successful king, but his personal character and piety endeared him to his people. In appearance he is represented as tall, dignified and kindly with rosy cheeks and a long white beard. He was regarded as a saint long before he was officially canonized as Saint and Confessor by Pope Alexander III in 1161. A Confessor is a particular type of saint. The term applies to those who suffered for their faith and demonstrated their sanctity in the face of worldly temptations, but who were not martyrs.

On 13 October 1163 St Edward's body was transferred to a Shrine prepared for it. At this time the famous ring was taken off his finger and deposited with the Abbey relics (all the relics unfortunately disappeared at the dissolution of the monastery in 1540).

King Henry III (1207-1272) held Edward the Confessor in great veneration and decided to rebuild his Abbey in the magnificent new Gothic style. He erected a new and costly Shrine with workmen and mosaics from Italy, which was finished in 1269. Sick persons made pilgrimages to the Shrine and knelt in the recesses to pray for healing. A cult of St Edward had grown up and people regarded him as the patron saint of England. However, after Henry III's death the cult declined and St George eventually became recognised as patron saint of England.

The Benedictine monastery at Westminster was dissolved by Henry VIII in 1540 and the Shrine despoiled. The Saint's body was buried in some obscure spot in the Abbey. Mary I restored the coffin to its place in 1557 and gave new jewels to replace the stolen ones. The fabric of the Shrine has suffered much during the centuries. However, the Confessor's coffin still lies in a cavity in the top part of the marble structure. The Shrine is regarded as the centre of the Abbey and five kings and four queens lie buried in his Chapel. Edward's wife Edith (died 1075) is buried near her husband's Shrine. On the western side of the Chapel is a stone screen with fourteen scenes of events, real and legendary, in the life of the Confessor. A special service is held every year on St Edward's Day (13 October).

Obviously, one reason the shrine survived is the church's connection to the royal family as the site of both coronation and burial:

Westminster Abbey has always enjoyed close links with the monarchy not least in its unbroken role as the coronation church since 1066.

Kings and queens have been significant benefactors of the Abbey, beginning with King Edgar (reigned 959–75) who gave the original monastic community at Westminster substantial lands covering most of what is now the West End of London. Almost a hundred years later King Edward (later Edward the Confessor) established his palace close to this monastic community and built for it a large stone church which became his own burial place. In the mid-thirteenth century Henry III rebuilt the Confessor’s church, providing the Gothic building we have today. Henry’s own burial here in 1272 established Westminster as the principal royal burial place for the next 500 years. Richard II, Henry V, Henry VII and Elizabeth I were all influential in shaping the Abbey’s history.

Westminster Abbey or - to use its formal name - the Collegiate Church of St. Peter, Westminster, is a ‘Royal Peculiar’. This means it is a free chapel of the Sovereign, exempt from any ecclesiastical jurisdiction other than that of the Sovereign. Royal Peculiars originated in Anglo-Saxon times and developed as a result of the unique relationship between the Norman and Plantagenet Kings and the English Church. In 1222 the Abbey was declared a Papal Peculiar, exempt from the jurisdiction of both the Bishop of London and the Archbishop of Canterbury. It has been a Royal Peculiar since 1533 when the Ecclesiastical Licences Act, as confirmed by the Act of Supremacy of 1559, transferred to the Sovereign the jurisdiction which had previously been exercised by the Pope. Other Royal Peculiars include St George’s Chapel at Windsor Castle and the Chapels Royal.

When we visited London several years ago, we very disappointed that we had to pay admission to the Abbey church (and not just a nominal donation!) -- and then, after visiting a few of the royal tombs, found out that we could not see the tomb of the saint at all! There is a podcast available of a sermon on St. Edward the Confessor's feast day this year here.
Posted by Stephanie A. Mann at 2:10 AM