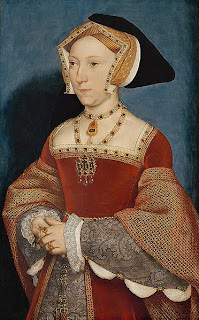 Jane Seymour is the most enigmatic of Henry VIII's wives. She fulfilled her husband's great desire for a son and then died. Some authors cast her as a pawn of her family; some as an unsympathetic character who took advantage of her mistress' (Anne Boleyn's) fall. Although her brother Edward Seymour, as Lord Protector Somerset during her son's youthful reign would legislate a definitely Calvinist Reformation, she seems to have been sympathetic to Catholicism. Jane spoke up to Henry VIII about the Dissolution of the Monasteries and the Pilgrimage of Grace but then was silenced by Henry's threatening warning about the fate of her predecessor who dabbled in his religious policy.


Jane did restore the Princess Mary to the King's household--at the cost of the most terrible oaths Mary was forced to swear, denying her parents marriage's validity and accepting her own bastardy. Jane was never crowned Queen of England--perhaps after the outcome of the lavish coronation of Anne Boleyn, Henry wanted to wait and see how this wife would work out--but she was the one wife buried with him, in the St. George Chapel at Windsor Castle.
She died probably as the result of an infection after her difficult delivery of her son, who was baptized and proclaimed heir immediately. Princess Mary was the chief mourner at her funeral.
Earlier this year, a popular blog posted an re-examination of Jane Seymour's life and character. For all my interest in the Tudor dynasty, I have not championed one queen against another. I admit I favor Queen Katherine of Aragon's rights to defend her valid sacramental marriage and her daughter's rights to succeed to the throne, but more than anything, I am sympathetic to all Henry VIII's wives. They lived with a tyrant, after all!
Posted by Stephanie A. Mann at 2:03 AM