Jansen, Jansenism, and the Jesuits 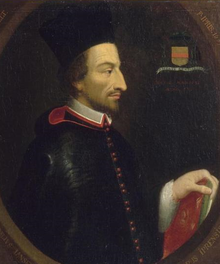 Cornelius Jansen, the Bishop of Ypres and namesake of "Jansenism" was born on October 28, 1585 in Acquoy, now in Gelderland, the Netherlands.

One of the contributors on this blog compares Jansenism to "a certain kind of conservative Anglicanism":

In a nutshell, Jansenism was a religious and political movement, which developed in the seventeenth and eighteenth centuries, mainly in France. It was a reaction against certain developments in the Catholic Church, Jesuit-inspired theology in particular and against Royal absolutism, of Lous XIV and Louis XV in particular.

This tendency within Catholicism was named after the Bishop of Ypres Cornelius Jansen, author of its founding text Augustinus, published in 1640. To begin with, Jansenism was a theological reflection centred on the problem of divine grace. It later became a political force, manifesting itself in different ways, touching moral theology, the relationship between faith and Christian life, the role of the clergy in society and various political issues.

The same author continues the discussion here. I have seen Jansenism refered to as "Catholic Calvinism" which is impossible, of course.

Jansenism divided Catholics in France between those who supported the Convent of Port Royal (including Blaise Pascal) and those who supported the Jesuits. Catholics in England in this period, being more concerned with staying alive, probably weren't as affected by this conflict. The Irish clergy were aware of the conflict, however, and certainly James II in exile in France experienced the divisions between Jesuits and Jansenists. He seemed to favor the more rigorous Jansenists while his Queen, Mary Beatrice of Modena was firmly on the Jesuits' side--at least according to Edward T. Corp in his book A Court in Exile: The Stuarts in France, 1688 - 1718.
Posted by Stephanie A. Mann at 2:04 AM