Our Lady of the Rosary

For this feast of Our Lady of the Rosary, here is my review of a book about the Rosary and Catholic Reformation, featuring an excellent chapter on the Rosary in recusant England:

The Mystery of the Rosary: Marian Devotion and the Reinvention of Catholicism by Nathan Mitchell

Although I found some of the terms that Mitchell uses off-putting and too technical (reframing, re-imagining, reinventing, renegotiating etc) and his repetitious analysis of Caravaggio's paintings (especially Madonna di Loreto) rather irritating, overall I have to give his work four stars. The book rewards careful and thoughtful reading.

He builds a strong argument for understanding the sixteenth century responses of the Roman Catholic Church to the Protestant Reformation, whether referred to as the Counter-Reformation or the Catholic Reformation, as more complex than uniform and organized programs and processes. By examining grassroots Marian devotions like the rosary, confraternities, and other means of meditation on the life of Christ (Caravaggio paintings or "The Mystical City of God" by Mary of Agreda), Mitchell demonstrates that Catholic believers in the period following the "dividing of Christendom" as Dawson calls it, embraced Catholic orthodoxy often by adapting those devotions to deeper understandings of Catholic worship, doctrine and discipline.

It is too bad that the publisher could not provide plates for the Caravaggio paintings described throughout the text. With access to the internet, I found all of them of course, but I think artwork should be included in the book when the author analyzes it to make his argument. Caravaggio's idiosyncratic way of presenting the child Jesus, Mary, St. Anne, St. Matthew or other saints in his artwork demonstrates Mitchell's argument that the Counter-Reformation/Catholic Reformation was not a monolithic movement of reform. Caravaggio includes dirty feeted pilgrims and buxom, balanced Madonnas in his works, which often offended viewers because they departed from the accepted iconography of Mary and the saints. And yet he is revealing a deeper understanding of the saints.

The chapter examining the use of the Rosary in sixteenth century England, when Catholics could not openly practice their faith, was particularly illuminating. Because they had no churches in which to worship and only seldom were able to receive the Sacraments, especially Holy Communion, Catholics used the Rosary as a focus for Eucharistic devotion and devout self-offering. Meditating on the mysteries of the Rosary does not require beads, so if beads weren't available or even too dangerous to possess, the faithful were still able to practice this devotion. It allowed Catholics in England to maintain church teaching about the Incarnation, Passion and Resurrection of Jesus as a form of catechetical devotion while reflecting on the Sacraments they SHOULD receive but weren't able to because of government persecution. When English Catholics did possess rosary beads, they were certainly emblematic of being a Catholic. In the 18th Century, as Parliament began to remove some of the restrictions on Catholics, Richard Challoner's "Garden of the Soul" provided more liturgical and sacramental devotion and guidance, but the Rosary continued as an identifying emblem of a Catholic, even in the United States during the 19th Century.

Finally, Mitchell discusses the Rosary in post-Vatican II context, framing his discussion around the term 'kitsch' to understand the endurance of the Rosary even as devotions outside of Mass and the Sacraments were often discouraged in the years following the Council. In spite of that discouragement, or even because of it, the Rosary has remained a favorite devotion among Catholics as diverse as Garry Wills and Mother Angelica, per Mitchell.

This is sometimes a rather cumbersome but more often a very illuminative examination of the Rosary and the Catholic Church's response to the Protestant Reformation of the 16th century and beyond. 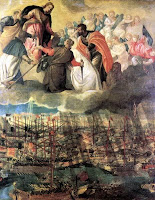 This feast was once known as Our Lady of Victory because it commemorated the victory of Christendom over the invading Turks. Christopher Check's CD set is now carried by Ignatius Press and may be purchased here:

On October 7, 1571, the most important sea battle in history was fought near the mouth of what is today called the Gulf of Patras, then the Gulf of Lepanto. On one side were the war galleys of the Holy League and on the other, those of the Ottoman Turks, rowed by tens of thousands of Christian galley slaves. Although the battle decided the future of Europe, few Europeans, and even fewer European Americans, know the story, much less how close Western Europe came to suffering an Islamic conquest.

On October 7, 1911, English poet and theologian G.K. Chesterton honored the battle with what is perhaps the greatest ballad of the 20th century. He wrote this extraordinary poem while the postman impatiently waited for the copy. It was instantly popular and remained so for years. The ballad by the great GKC is no less inspiring today and is more timely than ever, as the West faces the growing threat of Islam.

In the new 3-CD set, Lepanto: The Battle That Saved The West, Christopher Check, Executive Vice President of the Rockford Institute and an expert on Lepanto, tells the exhilarating story of Lepanto, first in his own words and then through the classic poem of G.K. Chesterton.
Posted by Stephanie A. Mann at 2:11 AM