Glastonbury and Its Legends 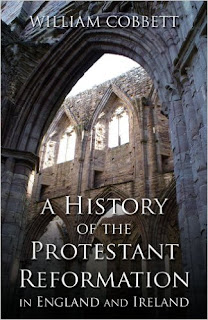 I am in the midst of re-reading William Cobbett's A History of the Protestant Reformation in England and Ireland, so A Clerk of Oxford's post on Glastonbury Abbey, with its legendary connections to King Arthur, Joseph of Arimathea caught my eye:

A story has been going around the British media this past week, springing from some new archaeological research which has been conducted at Glastonbury Abbey. This research, a four-year project based at the University of Reading, sounds very interesting: it has explored the early history of a site which has long held a unique place in popular culture in this country, associated as it is with Arthurian legend and with an early, mythical origin for the British church. You can read about the research and some of its findings on the University of Reading website.

This is all great. But the way this story has been reported in the media this week has been troubling me, so I finally gave in to temptation and decided to blog about it. What I intend to do in this post is to look at how this story has been reported, to challenge some of the unquestioned assumptions which are apparent in that reporting, and to suggest some alternative ways in which one might think about medieval monasteries and the legends they told. I want to make it clear that in doing so I’m absolutely not making any criticism of the archaeologists, their research, or how they communicated it; I don’t know enough about the circumstances or the subject to do that, and I’m sure their work is exemplary. (I’m not an archaeologist, nor a specialist on Glastonbury; I also know how easily a message can get distorted as it passes through the hands of journalists and spreads on social media.) I’m not criticising anyone, really, and I don't think anything I say here will be of much interest to academics or specialists. This is for those of you non-specialists - I know lots of you read this blog! - who are interested in history but who can sometimes find the medieval church and its legends bizarre and off-putting.

The media attention to the story emphasizes that the abbot and monks of Glastonbury decided in the twelfth century to mislead prospective pilgrims, and that's what the excellent Clerk addresses, namely:

Sticking, however, to the medieval, there are two things about this reporting which trouble me:
a) assuming that we know for sure the motive behind the monastery’s actions
b) passing moral judgement on that motive. . . .

Read some of these reports and you’d think the monks were raising money for the fun of rolling around in piles of gold like Scrooge McDuck; maybe some of them were, but I rather doubt it. So why use such language? I don’t know about you, but when I see a business selling its wares, a charity trying to raise money, or a school running a fundraiser I don’t think or talk in terms of these institutions being ‘on the make’ or ‘filling their coffers’. They’re raising money in order to do the things they do. It’s not a scam (although obviously it might be sometimes); it’s just life.

The moral judgement implied by terms such as ‘money-spinning’ must come, then, from the idea that these monks have deliberately and deceitfully distorted historical fact - 'forged', 'fabricated' and 'doctored' history - in order to raise their money. That’s one reading of the situation. Let me propose some others.

Read the rest there. In his history of what he always refers to as the "Reformation" (in quotes), Cobbett goes to great lengths to defend the monasteries in the sixteenth century against the attacks of David Hume in his History of England, which Cobbett quotes in chapter IV:

It is safest to credit the existence of vices naturally connected with the very institution of the monastic life. The cruel and inveterate factions and quarrels therefore, which the commissioners mentioned, are very credible among men who, being confined together within the same walls, can never forget their mutual animosities, and who, being cut off from all the most endearing connections of nature, are commonly cursed with hearts more selfish and tempers more unrelenting than fall to the share of other men. The pious frauds practised to increase the devotion and liberality of the people may be regarded as certain, in an order founded on illusion, lies, and superstition. The supine idleness also and its attendant, profound ignorance, with which the convents were reproached, admit of no question. No manly or elegant knowledge could be expected among men whose life, condemned to a tedious uniformity and deprived of all emulation, afforded nothing to raise the mind or cultivate the genius.

Cobbett finds in a source Hume often otherwise references (Bishop Tanner of St. Asaph's Notitia Monastica) a different picture of the monasteries and their benefits to English culture and society that contradicts Hume's characterization:

For, first, the choicest records and treasures in the kingdom were preserved in them. An exemplification of the charter of liberties granted by King Henry I. (Magna Charta) was sent to some abbey in every county to be preserved. Charters and Inquisitions relating to the County of Cornwall were deposited in the Priory of Bodmin ; a great many rolls were lodged in the Abbey of Leicester and Priory of Kenilworth, till taken from thence by King Henry III. King Edward I. sent to the religious houses to search for his title to the kingdom of Scotland, in their ledgers and chronicles, as the most authentic records for proof of his right to that crown. When his sovereignty was acknowledged in Scotland, he sent letters to have it inserted in the chronicles of the Abbey of Winchcomb and the Priory of Norwich, and probably of many other such-like places. And when he decided the controversy relating to the crown of Scotland, between Robert Bruce and John Baliol, he wrote to the Dean and Chapter of St. Paul's, London, requiring them to enter into their chronicles the exemplification therewith sent of that decision. The learned Mr. Selden hath his greatest evidences for the dominion of the narrow seas belonging to the King of Great Britain from Monastic records. The evidences and money of private families were oftentimes sent to these houses to be pre- served. The seals of noblemen were deposited there upon their deaths. And even the King's money was sometimes lodged in them. Secondly, they were schools of learning and education ; for every convent had one person or more appointed for this purpose; and all the neighbours that desired it might have their children taught grammar and church music without any expense to them. In the nunneries also young women were taught to work and to read English and sometimes Latin also. So that not only the lower rank of people who could not pay for their learning, but most of the noblemen's and gentlemen's daughters were educated in those places. Thirdly, all the monasteries were, in effect, great hospitals, and were most of them obliged to relieve many poor people every day. There were likewise houses of entertainment for almost all travellers. Even the nobility and gentry, when they were upon the road, lodged at one religious house and dined at another, and seldom or never went to inns. In short, their hospitality was such, that in the Priory of Norwich one thousand five hundred quarters of malt and above eight hundred quarters of wheat, and all other things in proportion, were generally spent every year. Fourthly, the nobility and gentry provided not only for their old servants in these houses by corrodies, but for their younger children and impoverished friends, by making them first monks and nuns, and in time priors and prioresses, abbots and abbesses. Fifthly, they were of considerable advantage to the Crown : (i) By the profits received from the death of one abbot or prior to the election, or rather confirmation, of another. (2) By great fines paid for the confirmation of their liberties. (3) By many corrodies granted to old servants of the Crown, and pensions to the king's clerks and chaplains, till they got preferment. Sixthly, they were likewise of considerable advantage to the places where they had their sites and estates : (i) By causing great resort to them, and getting grants of fairs and markets for them. (2) By freeing them from the forest laws. (3) By letting their lands at easy rates. Lastly, they were great ornaments to the country : many of them were really noble buildings, and though not actually so grand and neat, yet perhaps as much admired in their times as Chelsea and Greenwich Hospitals are now. Many of the abbey churches were equal, if not superior, to our present cathedrals; and they must have been as much an ornament to the country, and employed as many workmen in building and keeping them in repair, as noblemen's and gentlemen's seats now do.

Cobbett waxes wroth at "malignant Hume" saying that he always casts Catholics and the Catholic Church in the worst light possible. Perhaps this is what is going on in the stories about Glastonbury Abbey.
Posted by Stephanie A. Mann at 12:30 AM

Email ThisBlogThis!Share to TwitterShare to FacebookShare to Pinterest
Labels: A Clerk of Oxford, David Hume, Glastonbury Abbey, Monasteries, The Dissolution of the Monasteries, William Cobbett