St. Julian of Norwich at the Ladder with the Sisters of Sophia 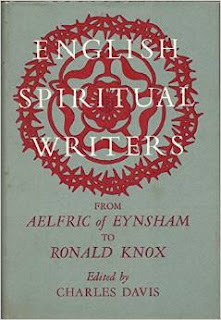 "I think that Julian of Norwich is with Newman the greatest English theologian." -- Thomas Merton

Ellen Awe made a presentation on Julian of Norwich at the third meeting of the Sisters of Sophia and cited that quotation from Thomas Merton.

That puzzled me at first because of course I thought of St. Julian of Norwich as a mystic who saw visions; while Blessed John Henry Newman was not a visionary. Then I re-read the entire quote that Awe gave us from a letter Merton wrote in 1962:

I think that Julian of Norwich is with Newman the greatest theologian. She really is that. For she reasons from her experience of the great Christian mystery of Redemption. She gives her experience and her deductions clearly, separating the two. And the experience is of course nothing subjective. It is the mind of Christ as apprehended by her, with the mind and formation of a fourteenth century Englishwoman.

I read the chapter on St. Julian of Norwich in a 1961 Sheed & Ward book on spiritual writers in England and then read the chapters on Newman, and I think I begin to see connections between St. Julian of Norwich and Blessed John Henry Newman, if this is what Merton meant. Like Julian, Newman was absolutely certain of the relationship between himself and God: "To every one of us there are but two beings in the whole world, himself and God . . ." Newman had apprehended this fact when he was sixteen, during his crucial first conversion: "from a boy I had been led to consider that my Maker and I, His creature, were the two beings, luminously such, in rerum natura."

Newman viewed dogma and revelation as the foundation of faith, not subjective and personal insight. The truth about Jesus Christ and His Church was objective whether or not a person accepts it. H. Francis Davis writes: "Newman pointed out [that] we must not listen to our listening, but to the truths God teaches us. Faith is not feeling, but the acceptance of Christ, who is its Object. It must lead to action with regard to that Object. One without the other would be a mockery. Faith, for Newman, is self-effacing. It looks out of itself and beyond itself, to the God who reveals Himself." (p. 124)

Also, while Newman wouldn't usually be called a mystic, Davis reminds us how much Newman appreciated the invisible world, which he felt more real and true than the visible. As he begins his Parochial and Plain Sermon, "The Invisible World":

THERE are two worlds, "the visible, and the invisible," as the Creed speaks,—the world we see, and the world we do not see; and the world we do not see as really exists as the world we do see. It really exists, though we see it not. The world we see we know to exist, because we see it. We have but to lift up our eyes and look around us, and we have proof of it: our eyes tell us. We see the sun, moon and stars, earth and sky, hills and valleys, woods and plains, seas and rivers. And again, we see men, and the works of men. We see cities, and stately buildings, and their inhabitants; men running to and fro, and busying themselves to provide for themselves and their families, or to accomplish great designs, or for the very business' sake. All that meets our eyes forms one world. It is an immense world; it reaches to the stars. Thousands on thousands of years might we speed up the sky, and though we were swifter than the light itself, we should not reach them all. They are at distances from us greater than any that is assignable. So high, so wide, so deep is the world; and yet it also comes near and close to us. It is every where; and it seems to leave no room for any other world.

And yet in spite of this universal world which we see, there is another world, quite as far-spreading, quite as close to us, and more wonderful; another world all around us, though we see it not, and more wonderful than the world we see, for this reason if for no other, that we do not see it. All around us are numberless objects, coming and going, watching, working or waiting, which we see not: this is that other world, which the eyes reach not unto, but faith only.

Let us dwell upon this thought. We are born into a world of sense; that is, of the real things which lie round about us, one great department comes to us, accosts us, through our bodily organs, our eyes, ears, and fingers. We feel, hear, and see them; and we know they exist, because we do thus perceive them. Things innumerable lie about us, animate and inanimate; but one particular class of these innumerable things is thus brought home to us through our senses. And moreover, while they act upon us, they make their presence known. We are sensible of them at the time, we are conscious that we perceive them. We not only see, but know that we see them; we not only hold intercourse, but know that we do. We are among men, and we know that we are. We feel cold and hunger; we know what sensible things remove them. We eat, drink, clothe ourselves, dwell in houses, converse and act with others, and perform the duties of social life; and we feel vividly that we are doing so, while we do so. Such is our relation towards one part of the innumerable beings which lie around us. They act upon us, and we know it; and we act upon them in turn, and know we do.

I would have to read more of St. Julian of Norwich's Revelations, but perhaps this is what Merton saw in her that was theologically comparable to Newman--that they both were responding to the revelation of God's love for us, demonstrated by God's Incarnation and Redemption and that they both saw beyond the visible world to the invisible.

Intriguing--but I have to finish a presentation for next week, so can't go any further.
Posted by Stephanie A. Mann at 12:30 AM