I read David W. Fagerberg's The Size of Chesterton's Catholicism many years ago (it was published in 1989 by the University of Notre Dame Press):

English writer G. K. Chesterton was widely known not only for his newspaper columns, novels, poetry, plays, and detective stories, but also for his theological and Catholic apologetic works. This celebration of Chesterton’s passion for his faith builds on his own words to reveal the Catholic paradox he was so fond of exploring. David W. Fagerberg draws on Chesterton’s theological writings—avoiding secondary sources so that the reader can encounter his thought as directly as possible—to show how Chesterton championed an accessible Catholicism of great robustness. 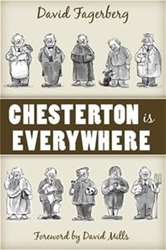 Chesterton’s modesty would have prevented him from claiming sainthood. It is I, not he, who shall compare his salutary effect with a saint’s, but the point is true, nonetheless, that what he said about saints is perfectly and exactly applicable to himself: “The saint is a medicine because he is an antidote. Indeed that is why the saint is often a martyr; he is mistaken for a poison because he is an antidote. He will generally be found restoring the world to sanity by exaggerating whatever the world neglects, which is by no means always the same element in every age. Yet each generation seeks its saint by instinct; and he is not what the people want, but rather what the people need . . . . Therefore it is the paradox of history that each generation is converted by the saint who contradicts it most.” The way in which Chesterton contradicts us most is by being a happy man. By this trait he can serve as our antidote, exaggerating what we neglect, supplying what we need, even if we do not know we do.

The happiness that pervades every word Chesterton writes is occasioned both by things and by people. In his hands, as in the hands of an artist, something is done to the ordinary world that enables the viewer to see its landscape and its citizens anew. “At the back of our brains, so to speak, there was a forgotten blaze or burst of astonishment at our own existence,” he said. “The object of the artistic and spiritual life was to dig for this submerged sunrise or wonder; so that a man sitting in a chair might suddenly understand that he was actually alive, and be happy.” To Chesterton, all things appear as wonderful parts of a thrilling fairyland. He retains an innocent, original delight in things instead of succumbing to the monotony that assails most of us as we grow older.