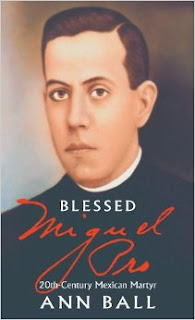 How appropriate that Blessed Miguel Pro's memorial comes this year the day after the Solemnity of Our Lord Jesus Christ King of the Universe! He was executed by firing squad on November 23, 1927 after crying out "Viva Christo Rey"--"Long Live Christ the King"!

This brief EWTN biography sums up his life:

Miguel Pro was born January 13, 1891, at Guadalupe Zacatecas, Mexico. From his childhood, high spirits and happiness were the most outstanding characteristics of his personality. The loving and devoted son of a mining engineer and a pious and charitable mother, Miguel had a special affinity for the working classes which he retained all his life.

At 20, he became a Jesuit novice and shortly thereafter was exiled because of the Mexican revolution. He traveled to the United States, Spain, Nicaragua and Belgium, where he was ordained in 1925. Father Pro suffered greatly from a severe stomach problem and when, after several operations his health did not improve, in 1926 his superiors allowed him to return to Mexico in spite of the religious persecution in the country.

The churches were closed and priests were in hiding. Father Pro spent the rest of his life in a secret ministry to the sturdy Mexican Catholics. In addition to fulfilling their spiritual needs, he also carried out the works of mercy by assisting the poor of Mexico City with their temporal needs. He adopted many disguises to carry out his secret ministry. In all that he did, he remained filled with the joy of serving Christ, his King, and obedient to his superiors.

Falsely accused in a bombing attempt on the President-elect, Pro became a wanted man. He was betrayed to the police and sentenced to death without the benefit of any legal process.

On the day of his death, Father Pro forgave his executioners, prayed, bravely refused the blindfold, and died proclaiming "Long Live Christ the King!"

Christ the King, by the intercession of Blessed Miguel Pro, I beg you to answer my prayers. Give me the grace and the strength necessary to follow your heroic example and to live my Catholic faith in spite of all temptations and adversities. Amen.

Evelyn Waugh referenced Pro's martyrdom in the second edition of his biography, Edmund Campion, in 1946 (the first edition was in 1935). Waugh also refers to a nineteenth century biography of Campion by Richard Simpson:

We have come much nearer to Campion since Simpson's day. He wrote in the flood-tide of toleration with Elizabeth's persecution seemed as remote as Diocletian's. We know now that his age was a brief truce in an unending war. The Martyrdom of Father Pro in Mexico re-enacted Campion's in faithful detail. We are nearer Campion then when I wrote of him. . . . The haunted, trapped, murdered priest is our contemporary and Campion's voice sounds to us across the centuries as though he were walking at our elbow.

Blessed Miguel Pro was not executed by being hung, drawn, and quartered, so that's not the "faithful detail" that Waugh highlights. The parallels between Campion and Pro are that they had served the Catholic people in disguise since their vocation as priest had been declared illegal by the state; that they were arrested and tried for a conspiracy that did not exist, and that they offered their lives for the true king of the world, Jesus Christ, and His Church.
Posted by Stephanie A. Mann at 12:30 AM