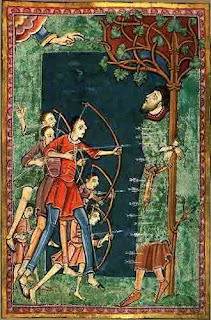 Today is the feast of St. Edmund the Martyr, king of East Anglia. Abo of Fleury describes his martyrdom:

Then king Edmund summoned a certain bishop with whom he was most intimate, and deliberated with him how he should answer the fierce Ivar. The bishop was afraid because of this emergency, and he feared for the king's life, and counselled him that he thought that Edmund should submit to what Ivar asked of him. Then the king became silent, and looked at the ground, and then said to him at last : "Alas bishop, the poor people of this country are already shamefully afflicted. I would rather die fighting so that my people might continue to possess their native land." The bishop said: "Alas beloved king, thy people lie slain. You do not have the troops that you may fight, and the pirates come and kidnap the living. Save your life by flight, or save yourself by submitting to him." Then said king Edmund, since he was completely brave: "This I heartily wish and desire, that I not be the only surviror after my beloved thegns are slain in their beds with their children and wives by these pirates. It was never my way to flee. I would rather die for my country if I need to. Almighty God knows that I will not ever turn from worship of Him, nor from love of His truth. If I die, I live."

After these words he turned to the messenger who Ivar had sent him, and, undaunted, said to him: "In truth you deserve to be slain now, but I will not defile my clean hands with your vile blood, because I follow Christ who so instructed us by his example; and I happily will be slain by you if God so ordain it. Go now quickly and tell your fierce lord: 'Never in this life will Edmund submit to Ivar the heathen war-leader, unless he submit first to the belief in the Saviour Christ which exists in this country.'" Then the messenger went quickly on his way, and met along the road the cruel Ivar with all his army hastening toward Edmund, and told the impious one how he had been answered. Ivar then arrogantly ordered that the pirates should all look at once for the king who scorned his command, and sieze him immediately.

King Edmund, against whom Ivar advanced, stood inside his hall, and mindful of the Saviour, threw out his weapons. He wanted to match the example of Christ, who forbade Peter to win the cruel Jews with weapons. Lo! the impious one then bound Edmund and insulted him ignominiously, and beat him with rods, and afterwards led the devout king to a firm living tree, and tied him there with strong bonds, and beat him with whips. In between the whip lashes, Edmund called out with true belief in the Saviour Christ. Because of his belief, because he called to Christ to aid him, the heathens became furiously angry. They then shot spears at him, as if it was a game, until he was entirely covered with their missles, like the bristles of a hedgehog (just like St. Sebastian was). When Ivar the impious pirate saw that the noble king would not forsake Christ, but with resolute faith called after Him, he ordered Edmund beheaded, and the heathens did so. While Edmund still called out to Christ, the heathen dragged the holy man to his death, and with one stroke struck off his head, and his soul journeyed happily to Christ. There was a man near at hand, kept hidden by God, who heard all this, and told of it afterward, just as we have told it here.

The relics of St. Edmund the Martyr were brought to Beodricsworth sometime around 903 A,D. and Beodricsworth, thankfully, became known as Bury St. Edmunds and became a great shrine, drawing many pilgrims. In 1020, the Benedictine abbey was founded. 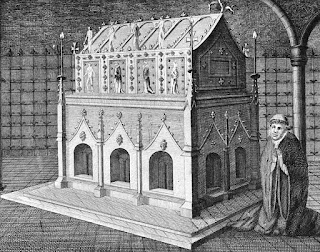 Of course, as a faithful reader of this blog, you know how it all ends:

Early in 1538, the agents for spoiling the greater monasteries (in this case Williams, Pollard, Parys, and Smyth) visited St. Edmunds. Writing to Cromwell, from Bury, they tell the Lord Privy Seal that they found a rich shrine which was very cumbrous to deface; that they had stripped the monastery of over 5,000 marks in gold and silver, besides a rich cross bestudded with emeralds and other stones of great value; but that they had left the church and convent well furnished with silver plate. (fn. 80)

On 4 November, 1539, this famous abbey was surrendered. The surrender is signed by Abbot John Reeve, Prior Thomas Ringstede (alias Dennis), and by forty-two other monks. (fn. 81)

Sir Richard Rich and other commissioners who had received the surrender wrote to the king on 7 November, saying they had not yet assigned the ex-abbot any pension, but suggested as he had been 'very conformable and is aged,' and as the yearly revenues of his house would be 4,000 marks, that he should have 500 marks a year and a house. They had taken into custody for the king the plate and best ornaments, and sold the rest. The lead and bells were worth 4,500 marks. They desired to know whether they were to deface the church and other edifices of the house.(fn. 83) On 11 November, the abnormally large pension of £333 6s. 8d. was allotted to the abbot. (fn. 84) He lived, however, only a few months after the dissolution of his house. Weighed down, as it is said, with sorrow and disappointment at the complete degradation of his order, he died on 31 March, 1540, in a small private house at the top of Crown Street, Bury St. Edmunds, never having drawn a penny of his pension. He was buried in the chancel of St. Mary's Church, with a pathetic Latin epitaph on the brass over his remains. The brasses were torn from his grave in 1643, and in 1717 the slab was broken up and the remains removed to make way for the burial of a ship's purser named Sutton. (fn. 85)

May Abbot John Reeve rest in peace, his broken heart healed. It wasn't enough that he had to be exiled from his life in religion, but later generations thought it their right to disturb his remains. I pray that he and St. Edmund rejoice in heaven!
Posted by Stephanie A. Mann at 12:30 AM